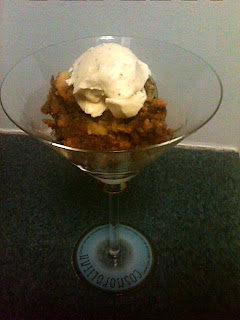 posting this for my co-workers....

At our recent Red Sox Home Opener office party (oh yes...any excuse for a party around here !) we were encouraged to bring desserts...well, as you all probably know I need very little encouragement in that area :). The guys suggested my Blueberry-White Chocolate Bread Pudding  , which I liked the idea of except for the lack of ovens in my office (really, it's best served warm.) I recalled in my foodie reading adventures seeing variations on bread pudding made in a slow cooker...one of my most-loved appliances. Just a few tweaks, I thought, and one of my most famous desserts could be brought to a whole new level. Less butter and more chocolate, and a bread that would work a little better with low and slow heat...oh yeah, I got this !

I showed up at work bright and early with my dry ingredients ready in the crockpot and my eggs and cream all mixed up in an oversized water bottle. A little mixing, plug it in....and after three and a half hours later of tormenting anyone who walked into the kitchen with the smell,  I had what was possibly the best version of this pudding I have ever made. And that, my friends, is saying something.

Without further ado...here's what to do !


Whisk the eggs in a large bowl. Whisk in the cream, brown sugar, vanilla, cinnamon and nutmeg. Add the bread, chocolate, and dried blueberries and stir well, Pour into crockpot. Cook on LOW for 3 1/2 hours, or until toothpick inserted in center comes out clean. Serve with vanilla ice cream or whipped cream.

A note on the chocolate....if you're going to use white chocolate, try to use a really good quality one to avoid that fake vanilla flavor. Ghirardelli is not only good quality, but it comes in convenient bags of chips. No, they're not paying me to say that :)