By popular demand...the annual reposting of our St. Patrick' Day Feast. You may also enjoy :


Our annual St. Patrick's Feast was held this past weekend, and a grand, super, brilliant time it was, too. We somehow crammed 14 people in our tiny apartment for the usual Irish-American spread of corned beef and cabbage, potatoes, turnips and other various and sundry vegetables, apple crisp, and of course, plenty of beer and whiskey !

Recipes at the end of the entry...

First, a word about the meal itself. Corned beef is actually not really a particularly Irish dish. Much more popular in Ireland is Boiled Bacon and Cabbage - but you need real Irish bacon for that, not always available here. The dinner we served is actually pretty much a New England Boiled Dinner...except that often is made with a picnic shoulder instead of corned beef, and has more vegetables. Confused yet ? You should be !!

Here's a bit more on corned beef, from Wikipedia : "Despite being a major producer of beef, most Irish...did not regularly consume the meat product in either fresh or salted form. This was due in large part to its prohibitive cost in Ireland, the fact that the beef cattle were owned by the British colonisers and not by the Irish, and that most if not all of the corned beef was exported. Despite the popular assumption in North America that corned beef dishes are typical of traditional Irish cuisine, it was not until the wave of 18th century Irish immigration to the United States that much of the ethnic Irish first began to consume corned beef. In Ireland today, the serving of corned beef is geared toward tourist consumption and most Ireland Irish do not identify the ingredient with native cuisine. The popularity of corned beef over bacon to the immigrated Irish was likely present due to that fact that corned beef in their native land was considered a luxury product, but was cheaply and readily available in America". Pretty interesting stuff !

Back to our spread...first, we started with a selection of Irish cheeses (two farmhouse cheddars and a Cashel Blue, which is an Irish blue cheese ..very delicate and sweet. )

Next up, the main course :

Mark's Corned Beef is really amazing. He adds a secret ingredient to the boiling water : grapefruit juice. I'm not 100% sure what it really does in there...I know it's a natural enzyme, so it makes things more tender. And I know that whatever it does, his is the best corned beef I've ever had and the only one I'll usually eat.

My Irish Soda Breadwas written up a few months ago...click on the link for the details. This meal is really when I get into it...made six loaves this year, and they ALL went !! 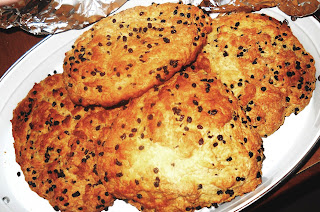 The dessert for this meal - Irish Apple Crisp with Whiskey Whipped Cream - is really just amazing. I've been making apple crisps for years, of course...it's one of my family's favorite desserts. I have two that I make - one with a flour and sugar crust, and one with an oatmeal topping...I wanted something Irish, so Irish Oatmeal it was. The whiskey whipped cream is something I saw mentioned years ago in connection with another recipe, which I thought might work here...and oh, baby, does it work. Something about the whiskey, the oats, the apples and the spices all combines for, well, a Culinary Orgasm :


After all this feasting, of course, all we really wanted to do is sit around and drink whiskey. Good thing we had plenty !


Another year, another amazing dinner party...seriously, I love my family and friends. Sláinte to you and yours...and may you be in Heaven a half hour before the devil knows you're dead !!

Mark says "If you can find a whole brisket, buy it - that way you get the point and flat at the same time, and some people prefer one or the other. The corned beefs made from eye of the round are also great, as they don't shrink and have less fat. On gray vs red...go with your personal preference. Gray is tougher and saltier, but more traditional in New England."

Recipe is given for one whole brisket...adjust accordingly. It's corned beef, pretty hard to get the proportions wrong !

Rinse meat and put aside spice packet. Place in pot with water to cover. Bring to a low boil, and let boil for about 30 minutes. Drain and change the water in the pot, adding the grapefruit juice, onions and spices to the meat. Make sure you have enough liquid in the pot to add some vegetables later. Boil for about 2 1/2 hours. Add the potatoes and turnips at about the 2 hour 15 minute mark. Pull the beef out and cover (leave the potatoes and turnips in), and add the carrots and cabbage. Boil the vegetables for another 15 minutes, or until tender.

Heat oven to 375 degrees. Place apples in ungreased 2-quart rectangular baking dish or pan. Toss with 2 teaspoons of the cinnamon, 1 teaspoon of the nutmeg, and the juice from the lemon half.

In large bowl, combine remaining ingredients including rest of cinnamon and nutmeg; mix with pastry blender or fork until crumbly. Sprinkle crumb mixture evenly over apples. Bake 25 to 35 minutes or until apples are tender and topping is golden brown. Serve warm with cream, ice cream or whipped cream...or, to really do it right :

Whip the cream until it begins to form soft peaks. Add the sugar and whiskey and beat until stiff peaks form. Cover and chill until needed.
Posted by Karen at 7:39 AM No comments: Links to this post

More often than not, the scene in my kitchen unfolds like a Food Network show..."Iron Chef", maybe, or "Chopped" (or, as my friend AB likes to call it, "whack-a-chef") minus the truly bizarre ingredients (no way am I cooking with cough drops or strawberry Quik...not gonna happen.) We'll have an overabundance of something (on this day, it was sour cream - we kept forgetting we had some and buying more), pretty decent pantry staples (almonds and frozen berries), and a couple of hungry foodie judges (basically, that's most of the people you find around this place) Recently, these ingredients came together in this blog-worthy coffee cake - on my very first try, even. (That almost never happens - I always have to tweak a new recipe once or twice !)

I've made enough cakes - coffee and otherwise - to know the basics, and I had a pretty good idea of where I wanted to end up with this one...light and moist, with a hit of fruit and that magic crumbly sweetness you find in the best coffee cakes. The sour cream needed an egg and a little butter, for lift and flavor..the flour needed baking powder as well as baking soda to counteract the slight acidity of the sour cream...the fruit needed to stay sweet and suspended in the batter, without turning the cake pink (which can happens with frozen berries), and the almonds needed some friends to help them get a little streusel-y. 40 minutes of baking later, and we were practically fighting each other off with forks to get more.

I have a feeling this cake would adapt well to any sort of fruit and nut combination...blueberries and pecans, apples and walnuts, peaches and hazelnuts... always use what appeals to you (or, you know, whatever you have around is always good too :) ). The particular technique I used here actually works best with frozen fruit, since I sort of poked it down into the rather stiff batter...similar to how the Strawberry Buttermilk Cake comes together. You can of course use fresh fruit if you have it - you just may need to make some little holes for it to land in, if the fruit is soft. Trust me, it will all work out in the end....and so, in the immortal words of the Chairman : Allez cuisine !! 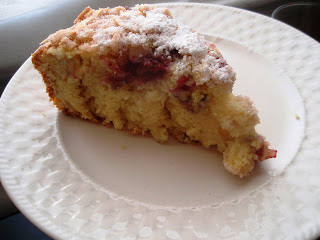 Preheat oven to 350. Butter and flour a 9" round or square baking pan (I used a fairly deep cake pan).

Whisk together the sour cream, melted butter, vanilla and egg until smooth. Stir in the flour, 1/2 cup of sugar, baking powder, baking soda and salt until smooth (this will be a fairly stiff batter). Spread in prepared pan.

In the same bowl you mixed the cake in (so you pick up the last bits of the flour), toss the raspberries and 1 tablespoon sugar together. Dump this mixture on top of the cake batter, spreading across more or less evenly. Press the raspberries down into the batter.

With a fork or your fingers, work the topping ingredients together until combined and crumbly. Sprinkle the crumbs over the top of the cake.

Bake for 40 - 45 minutes, or until browned and a tester comes out clean. Dust  top of cake with powdered sugar. Let cool about 10 minutes before cutting and serving.

Posted by Karen at 12:14 PM No comments: Links to this post