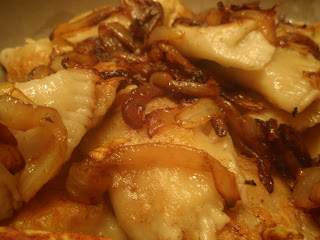 I had actually never had a pierogi until I met my husband (way back in my impressionable teenage years :) ) .  Potatoes in every conceivable guise from dumpling to latke to warm German salad, yes...pierogies, no. I had no idea those brilliant Eastern Europeans were stuffing delicious ravioli-type jewels with lovely fillings like like mashed potatoes and cheese, gently boiling and/or frying them, and carbo-loading to their heart's content. And lo, though I have been enjoying pierogies for many a year now, I've never actually tried to make these pillows of tastiness myself.

Flash forward to Thanksgiving 2012. Since we never seem to be able to cook for the actual number of people we have, we had an absolute ton of Mascarpone Mashed Potatoes with Caramelized Leeks left over (along with everything else !) We tried for days - truly, a valiant effort - but in the end, we just couldn't get through all those damn potatoes. The last of our turkey got turned into Turkey Tetrazzini and frozen for Turkey Barley Soup...and those dishes even make clever use of all the other vegetables and the gravy. But what to do with the delicious, delicious potatoes ? Shepherd's pie was out, and I really don't like frozen potatoes (they have a weird aftertaste). And, of course, my frugal Scots side rebelled against just throwing them out. And then it finally hit me - pierogies were basically filled with mashed potatoes, right ? Well, if regular pierogies were good, then ones stuffed with oh-my-god-to-die-for mashed potatoes would be AWESOME, right ? So what if I'd never made a pierogi in my life ? That's what the internet is for ! 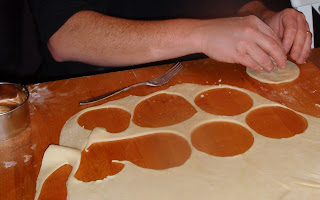 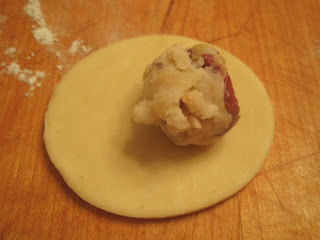 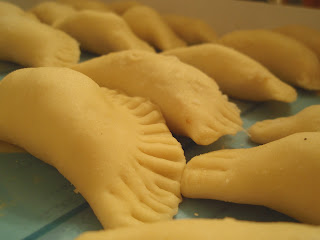 Oh, thank you thank you THANK YOU, internet. I found myself a great-looking, easy to follow pierogi dough recipe and set out to make myself some pierogi. I mixed and rolled, cut and stuffed, folded and crimped and froze. And a few days later, we were able to pull a bag of homemade pierogies from the freezer and cook them up. And readers, let me tell you...from now on, whenever I make mashed potatoes, I'm definitely making enough that I'll have leftovers for this fantastic, fantastic dish. These things were so easy...and so, so, SO good...,hopefully I'll never buy frozen ones again ! (No offense, Mrs. T).

A few notes on preparation : one, you definitely do not need to make the same mashed potatoes we did - your favorite recipe will be just fine, though I do recommend mixing in some mascarpone, cream or farmers cheese and a little bit of cooked onion before using for pierogi filling (as much as you like - nothing needs to be exact here ! ). Two, make sure you really stick with about a tablespoon of filling in each one of these - any more, and your pierogi will be too thick. Three, pierogies freeze extremely well (even though they contain potato) - the trick is to freeze them individually, spread out out on cookie sheets. Once they are completely frozen you can pile them all in a bag and they won't stick together. Just take out as many as you need - no need to defrost before cooking. And four, pierogis are great just boiled with butter and/or sour cream, but if you brown them on both sides in a little butter with some onion they're even better - definite Culinary Orgasm ! 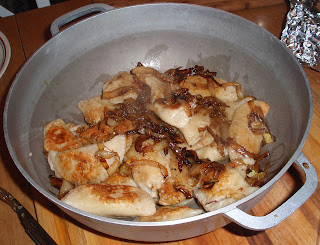 Each batch of dough makes about 12-15 pierogies, depending on size - can be very easily doubled

To prepare the pierogi dough, mix together the flour and salt. Beat the egg, then add all at once to the flour mixture. Add the 1/2 cup sour cream and the softened butter pieces and work until the dough loses most of its stickiness (about 5-7 minutes). You can use a food processor with a dough hook for this, but be careful not to overbeat (my Kitchen-Aid with dough hook took about 3 minutes to get it all together.)Wrap the dough in plastic and refrigerate for 20-30 minutes or overnight; the dough can be kept in the refrigerator for up to 2 days.

Roll the pierogi dough on a floured board or countertop until 1/8" thick. Cut circles of dough (3 to 3 1/2 inches is ideal - we used biscuit cutters, but round cookie cutters or even a drinking glass would work well) . Place a small ball of filling (about a tablespoon) on each dough round and fold the dough over, forming a semi-circle. Press the edges together with the tines of a fork. The pierogi can be frozen at this point (see above), or cooked right away.

When you're ready to cook them, bring a large pot of salted water to a boil and drop the pierogies in. Boil them gently for 8 - 10 minutes (a little longer if frozen), or until a tiny bit of the doughy part doesn't taste like raw dough. Drain them well, and either serve right away or brown them for a few minutes on each side in a frying pan with a bit of butter - and a little chopped onion, if you're game...

Mascarpone Mashed Potatoes with Caramelized Leeks
(Makes more than you need for this recipe !)

2 leeks, cleaned and sliced into rings
1/2 stick butter
3 pounds baby potatoes (white or red), skin on and scrubbed
2/3 milk or half and half
1/2 cup mascarpone cheese
salt and pepper to taste

Melt the butter in a good-sized saucepan, and add the leeks. Cook over low heat, stirring occasionally, until the leeks are golden brown. (If they seem to be drying out, add a splash of water or white wine).

While the leeks are caramelizing, place potatoes in a large pot and cover with lightly salted water. Bring to a boil, drain, and add back to the pot with the mascarpone and milk or cream. Mash to desired consistency, and stir in the cooked leeks. Add salt and pepper to taste.