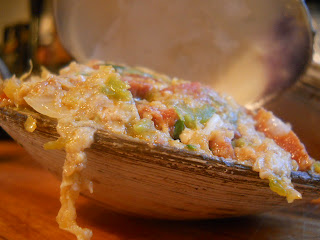 Yes, we're still cooking over here :) Doing a lot of other stuff too, but we're always cooking !

One of the "other stuff" things we did recently was to check out the Tall Ships in Boston, which was very cool (would have been even cooler to see them under sail, but even sitting in the harbor they are pretty damn impressive).

We capped off our trip with a stop at The Barking Crab , which I hadn't been to in years (and my partners in crime had never been to.)  A little touristy, but it was definitely good to get off our feet - it's a spot with a fun vibe and plenty of choices for everyone from crazy foodies like us to picky out-of-towners. And, they had stuffies !!

What are stuffies, you ask ?  Stuffies are a New England (Rhode Island, actually) version of stuffed clams - quahogs, to be precise, great big clams that are usually used for chowder. Lightly steamed until they give up their sweet meat, which is removed and mixed with chorizo and Portuguese sweet bread crumbs. The whole lot is stuffed back into the shells and baked into absolute deliciousness. 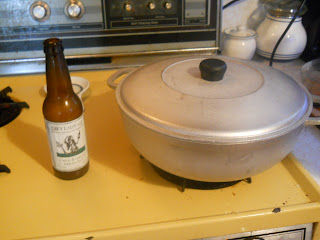 We started off with an Emeril recipe (original here ), but of course tweaked it quite a bit...I mean, really, this is us here :). Steaming in beer and using the sweet bread were the big changes, but there were some other things too...it's fun to play with recipes, and Emeril's usually adapt really well - though I refuse to make "Essence" (seriously, what a ridiculous name.) We also wanted to do these on our grill instead of heating up the house, which worked perfectly - just make sure you know how to keep a constant temperature with your grill. 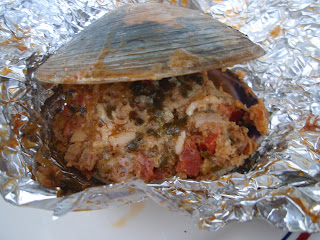 The stuffies were absolutely delicious, but the recipe actually needs a tiny bit more tweaking (basically less chorizo and a drier stuffing), and we are definitely looking forward to perfecting this one in the very near future. In the meantime, I'm going to give what we think the final recipe will be...if it changes, we'll be sure to let you know ! 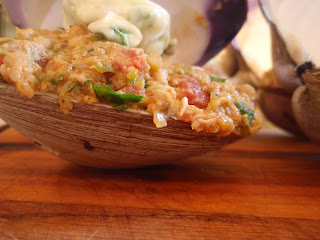 
Pour beer into a large pot that will hold the clams in a single layer if possible. Add the thyme and 2 tsp of the garlic, and bring to a boil.  Add the clams to the pot, cover, and steam for about 6 to 8 minutes or until the shells open. Discard any shells that do not open. Remove the clams from the pot and place on a parchment-lined sheet pan. When the clams are cool enough to handle, gently pry the shells apart enough to remove the clam, leaving the hinge attached. Loosen the muscle in the lower shell and remove the clam from the shell. Set aside the 6 nicest shells.  Finely chop the clam meat and set aside.


While the clams are steaming, in a mixing bowl stir the butter, remaining garlic, and 1 tablespoon of the parsley together. Refrigerate while you finish the clams and stuffing.


Heat a sauté pan over medium-high heat. Add the chorizo and cook until rendered, about 2 minutes. Add the onions, celery and peppers. Season with Old Bay and cook for 2 more minutes. Stir in the remaining garlic, the breadcrumbs, and reserved clam meat and remove from the heat. Stir in the reserved cooking liquid and the rest of the parsley. Add more Old Bay if needed and cool slightly.


Pack the stuffing mixture into one side of each shell. Using your hands, pat the stuffing firmly into each clam shell.  . Place about a tablespoon of the garlic butter on top of each stuffing mixture, then top each evenly with the cheese.  Close the shells as tightly as possible and wrap with aluminum foil.


*Portuguese Sweet Bread is pretty easy to find in New England – if your market sells rolls individually it’s really easy to just buy one or two rolls. To make dry bread crumbs, toast slices of the bread or rolls in a 300 degree oven for 15-20 minutes until nice and dry, then grind them up in your food processor.  If you don’t have easy access to sweet bread (or really don’t feel like making your own bread crumbs), just use regular bread or plain bread crumbs.  Your stuffies will still rock !
Posted by Karen at 9:04 PM 2 comments: 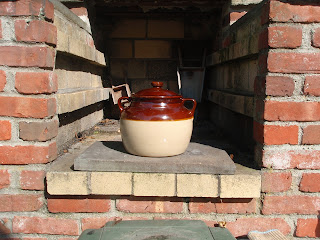 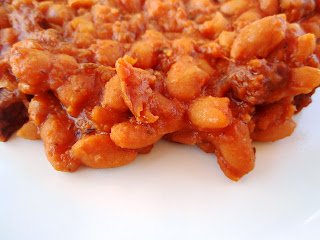 I have a confession to make.

I know, it doesn't make sense to me either. I love beans. LOVE them.  White beans, black beans, frijoles...I make (and eat) beans all the time, and I never get tired of them. And I absolutely adore cassoulet, which is basically a French version of baked beans with plenty of meat. But there is something about regular baked beans that just turns me right off.

When I was a kid, summers with my relatives in Maine meant a lot of traditional New England fare - which of course included hot dogs and beans with brown bread on Saturdays. I would eat as much brown bread as I could get, and a hot dog or two was okay as long as there was plenty of mustard involved. But I could really never get the beans down - and I was not by any stretch of the imagination a picky eater. I loved absolutely everything else they threw at me. Fried mackerel ? Oh hells yes !  But the beans...too sweet, too mushy, and not much flavor...really, just nothing to redeem them, particularly if there was brown bread left that needed eating :) I would push the beans around on my plate, delaying as long as possible - then slip them to Sput (the dog) when no one was looking.

Wow, I feel much better getting that off my chest. Confession really is good for the soul !

It was only when I got older and more experienced that I realized that homemade baked beans could actually be pretty tasty. I still don't like the ones that try to replicate the canned flavor (to me, I can't imagine why anyone would try and replicate that !), but there are some baked beans that make for very tasty eating. It's taken me a while to find a recipe that I really love, though - and one that I wanted to share with my readers. This is definitely The One. 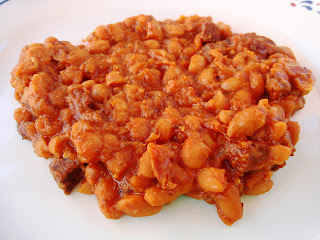 This is another of my adaptations of a Cooking Light recipe (original here) . There's nothing wrong with Cooking Light recipes, though I know that it seems I adapt them all the time. What happens is I see something in the magazine or on the website that gets my wheels turning - but of course, my wheels turn a little differently than most :) Here, for example, I knew I wanted to use our bean pot (picture at top), which I loved the idea of when we got it but has ended up being mostly a decorative element since we received it as a gift many, many years ago. I also knew I wanted different spicing, including "blooming" the spice a little (basically toasting them in oil, which does beautiful things to them)...well, you see where this is going. And where it went !

One idea I kept (and loved) from the original was the use of chorizo instead of salt pork, which is the traditional flavoring for baked beans. There's nothing wrong with salt pork - I always have some around for chowder making, or to render for other nefarious pork fat schemes. But chorizo and beans...mmm, definitely a match made in heaven. Chorizo, for those unfamiliar with it, is a lovely Spanish sausage, redolent with rich pork and the warm flavor of paprika. There are two basic versions of chorizo - one is a dry sausage similar to a pepperoni, which can be eaten as is. The other is a fresh version (usually Mexican or Portuguese in origin), closer texture-wise to Italian sausage which must be cooked before eating. Most supermarkets carry the fresh version, but this recipe called for the dry one which I was able to find at Russo's. 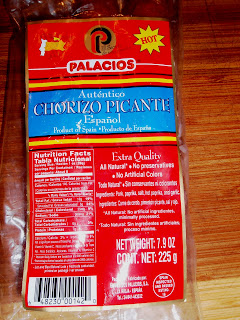 The fresh version would probably work, but you'll want to cook it a little longer before proceeding with the recipe - and you should drain some of the fat before  moving on, as well. Love the pork fat and all, but you want to be able to taste the beans here too !

One last note I want to add here is about the spices. You'll notice that I swapped in dried spices for the fresh...no, I'm not crazy and yes, I absolutely love fresh spices and use them whenever I can. But for hours-long cooking with beans, I've found that the dried actually hold up much better than the fresh. I've also included two somewhat harder to find items - smoked salt and smoked paprika. My stash came from Christina's in Inman Square (sadly, no website) but I realize not everyone is as...insane as I am when it comes to kitchen stocking (though I have noticed that more supermarkets are stocking at least the smoked paprika). By all means, feel free to make this dish with regular salt and paprika (though the smoked stuff is really good and useful in all sorts of dishes). It will still be super yummy....definite Culinary Orgasm !


Soak beans overnight in accordance with package directions (or use quick-soak method on bag.) Drain; do not rinse.


Heat a large Dutch oven over medium heat. Add chorizo; cook 4 minutes or until fat begins to render. Add onion and garlic; sauté 10 minutes or until tender. Add oregano, thyme, salt, cumin, paprika(s) and bay leaf; stir in with onions  and cook for a few minutes, stirring frequently, until you can really smell the spices. Add beans, beer and water - adding additional water if needed so the liquid just barely covers the beans - and bring to a boil. Cover, reduce heat, and simmer 45 minutes or until beans are just tender.

Preheat oven to 300°. Stir brown sugar, tomato paste, molasses and ketchup into bean mixture.  Cover (or transfer to bean pot);  bake at 300° for 4 hours or until beans are very tender and sauce is thick. Remove from oven; stir in vinegar and serve.

Email ThisBlogThis!Share to TwitterShare to FacebookShare to Pinterest
Labels: beans, side dish 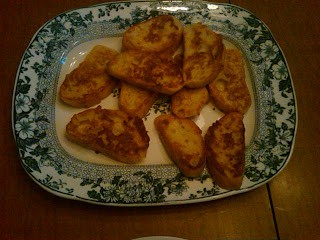