So many people have expressed surprise about me not having a Thanksgiving blog that I decided that I needed to have something up here - no matter how weird it feels. I'll explain.
I absolutely love Thanksgiving, of course - don't get me wrong. All that cooking and eating - and no gift giving ? Sweet !  The truth is, though, that we do tend to go pretty traditional around here for Turkey Day...and nothing I've made here isn't something that I haven't made before. I feel sort of guilty making a new blog post out of old recipes - but you, dear readers, have asked. And so you shall receive. It is, after all, the holidays ! And I am so thankful for all of the support I've gotten since I started this blog...I've had so much fun honing my writing skills, and the positive feedback has been absolutely fantastic. I feel truly blessed, and I am so thankful....so let's give thanks.

This year , we actually did the Thanksgiving day meal itself with some special, special friends - at their house. Such a wonderful night, and excellent food...but all we brought were pies and cranberry sauce. Us being us, of course, we had to make our own meal too, the next day...I mean, half the fun is all the leftovers.

Here's how we got ours :
Brined Roast Turkey 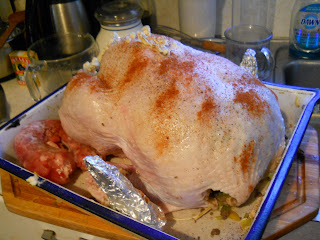 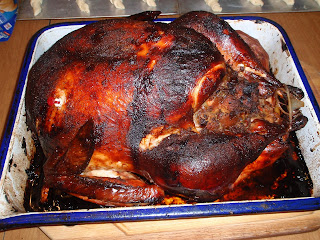 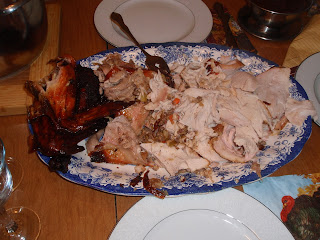 As I mentioned last year on this one...don't worry, this guy is definitely not burnt. The sugar (well, actually in this case maple syrup) in the brine makes it brown up extra crispy. An absolutely fantastic way to do turkey. Save the label from your turkey so you remember how much it weighs, and after you brine it up in the following deliciousness , stuff if desired (this year's winning recipe included), and cook according to your saved label directions.
Apple-Citrus-Spice Brine
5 cups water
1 quart apple cider
1 quart orange juice
1/2 cup kosher salt
1/2 cup maple syrup
1 teaspoon of whole cloves
1 teaspoon nutmeg

Bring the water, salt and sugar to a boil, and simmer until everything is dissolved. Let cool and mix in the rest of the ingredients. Seal turkey and brine in a large ziplock bag, and let it sit in the fridge for at least 24 hours.

Stuffing with Leeks and Sausage 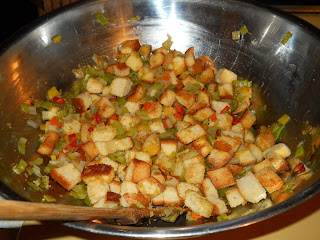 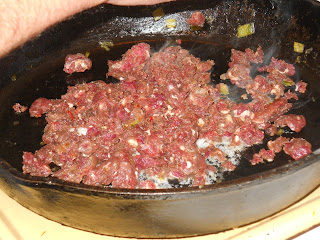 We used Alex's venison sausage this year...more on that in a later post. Ungodly good stuff.

Preheat oven to 350 degrees. While the sausage and vegetables are cooking (see below), spread bread cubes on a baking sheet and bake until dry and pale gold, about 20 minutes, turning pan about halfway through. Transfer to a large bowl.
Trim leeks, slice in half lengthwise, and rinse well. Place the leeks in a large bowl with water to cover to which you have added the cider vinegar. Soak for 15 minutes, then lift out of the water. Rinse again, and slice into 1 inch lengths.

While leeks are soaking, heat up a large skillet (medium to medium high) and add oil. Brown the sausage meat in the oiled pan, and set aside. Wipe out pan and melt butter in it over medium high heat. Add leeks, carrots, and celery to pan. Sauté until vegetables are tender 10-15 minutes or so. Season with salt, pepper, and Bell's.

Add sausage and vegetables to bowl with bread cubes, and toss well to combine. Let cool a bit and stir in eggs. Stuff into turkey, and pile any extra into a buttered casserole dish. Cook the extra stuffing at 375 for 30 minutes. 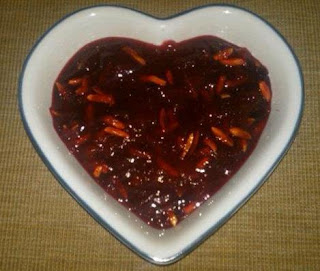 In a large saucepan, bring the sugar and the water to a boil. Simmer 5 minutes; do not stir. Add the cranberries and simmer until they all burst. Remove from heat and add preserves and lemon juice. When cool, stir in the nuts.

Makes about one quart - keep refrigerated until needed. 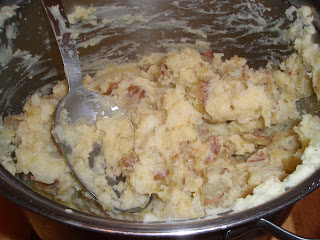 3 pounds baby potatoes (white or red), skin on and scrubbed
2/3 milk or half and half
1/2 cup mascarpone cheese
salt and pepper to taste

Place potatoes in a large pot and cover with lightly salted water. Bring to a boil, drain, and add back to the pot with the remaining ingredients. Mash to desired consistency. 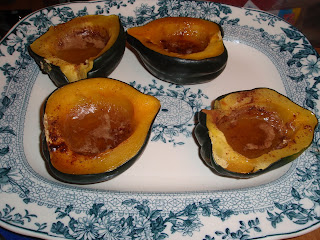 One of the only microwave recipes you will ever find in this blog :)
3 acorn squash, halved and cleaned
6 tablespoons butter
6 tablespoons maple syrup
1 1/2 teaspoons cinnamon
3/4 teaspoon nutmeg
1/4 teaspoon ground cloves
Place squash halves, cut side down, in microwave and cook for 10 minutes on High. Flip over and add remaining ingredients, distributing evenly among the 6 halves. Cook for another 5 minutes, or until nice and soft. 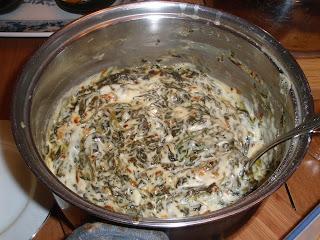 This is actually a new addition for me...usually we always have Spinach Provencal , but this year I had some cooked spinach I wanted to use up so I made the creamed. Loved it !
2 pounds baby spinach
1 stick butter
2 large shallots, sliced into rings
6 tablespoons flour
1 1/2 cups milk
1 1/2 cups cream
salt and pepper to taste
Steam or saute spinach until lightly cooked, and set aside.
Meanwhile, melt remaining butter in a saucepan, and whisk in flour. Gradually whisk in milk, and then cream. Simmer for 10 minutes or so, whisking regularly, until no flour taste remains.
Combine spinach, shallots, and cream sauce. Add salt and pepper to taste. Serve warm. 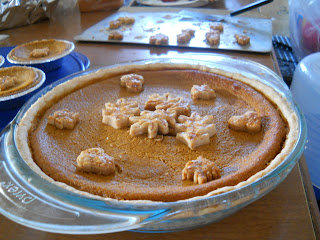 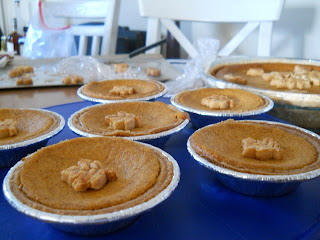 unbaked 10" pie shell (your favorite will be just fine - my favorite is below. If you use one smaller than 10 ", you'll have extra filling for tiny graham cracker crusts, or baking up as a custard)

Whip cream to very soft peaks, add sugar and spices, and continue to whip until it holds stiff peaks. Serve as soon as possible.


Lard Pie Crust
if you're really going for the gusto...pork fat all the way baby !

Pulse flour, salt and sugar in food processor fitted with steel blade until mixed. Add lard, and pulse until mixture resembles coarse meal. Keep pulsing, and dribble ice water in until mixture pulls away from sides of bowl and you can ball it up. Remove from bowl and divide into two balls, wrap in plastic wrap and refrigerate at least 30 minutes. Makes two single crusts or one double crust.

If you have scraps left over (as I did above), roll and cut or stamp into decorative shapes. Brush with beaten egg and bake alongside the pies for 10 - 15 minutes or so, until done. Place on pumpkin pies when cool. 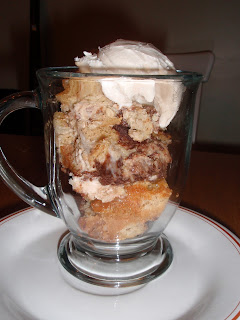 I'm so sorry for the lack of posts...I know, I'm a slacker :(. In my semi-defense, I've been home alone most of the last few weeks - which deprives me of my favorite foodie victims audience. Other than a new found fascination with BLT's (seriously, universe, why have you been holding out on me all these years and denying me the deliciousness that is the BLT ? Oh, yeah, it's because I don't like tomatoes and lettuce on sandwiches), I've barely been cooking.

Also, I don't want you to think that all we eat around here is bread pudding. I know I talk about it a lot...again, not really my fault...it's that damn bread fairy. What else can I do when inundated with loaf after loaf of delicious artisan bakery bread...for free ? . There's too much Scots and Yankee frugality in me to let all that delicious bread go to waste. Good thing none of us have problems with gluten. 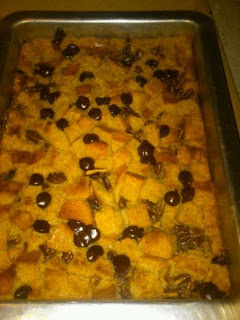 Basically, this is just a variation of the Blueberry-White Chocolate Bread Pudding that I make all the damn time (and everyone still seems to love). I do this all the time, and you should too - adapt for what you have around, or just what you like. Trust yourself ! 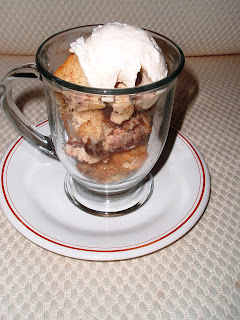 Preheat the oven to 350°F. Butter a 10 X 14-inch baking dish with the room-temperature butter.

Whisk the eggs in a large bowl. Whisk in the cream, brown sugar, vanilla and cinnamon. Add the bread, chocolate chips (reserve 2 tablespoons of the chips) and pecans and stir well. Pour into the prepared dish.

Bake until firm when pressed in the center, about 1 hour. About a minute before it comes out of the oven, sprinkle the remaining chocolate chips on the top.

Cool on a wire rack until just warm, about 20 minutes.