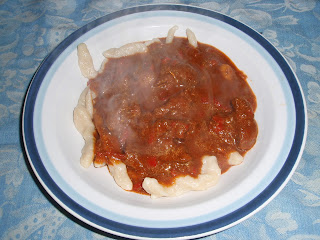 Okay, so it's not that we haven't been cooking...no, not that at all ! It's just with all the holiday craziness going on there's been no time to update the poor blog. Rest assured, we've been cooking and eating just fine - and now you're going to have to hear all about it.  First up : goulash.

We've been having all sorts of culinary fun with Alex's venison, and goulash seemed like a natural step to go in - but real Hungarian goulash, not the weird American stuff with hamburger and elbow macaroni that is eerily reminiscent of one of my true kitchen nightmares - American Chop Suey (shudder). No, I wanted a real goulash - a thick meaty stew, rich with onions and peppers...and real paprika.

I've been a lover of real Hungarian paprika since I was a teen, mostly courtesy of having a real Hungarian boyfriend :). It was at his house that I found out that paprika was an actual, real, delicious spice and not just something to garnish deviled eggs with. (And I still have a serious craving for paprika paste - minced paprika peppers the consistency of tomato paste, and possibly the best thing to put on toast with cream cheese ever.) Hungarian paprika is generally stronger and richer than Spanish or American varieties...those Hungarians really know their paprika stuff, which is amazing when you consider that peppers are native to the Americas and didn't even make it to Europe until after Columbus.

In any event, when my mother went to Hungary a while ago and asked what I wanted the answer was paprika, of course - that damn paste, and the powdered form.

The best way to bring out the flavor of paprika is to heat it in oil, which was one of the early steps in this goulash. Floured cubes of meat were browned in the bottom of the pot, then removed...oil was added to the pan, and then the onions and the lovely, lovely paprika.

With our goulash, we decided we wanted spaetzle. Spaetzle (the word means "little sparrow" in German) are small, roughly shaped sort of egg noodles...almost like small gnocchi, and pretty much the same thing as the Hungarian Csipetke, which are traditional with goulash (when made without potatoes, at least). Of course, neither of us had ever actually made spaetzle before - and we didn't have a spaetzle maker - but really, why should that stop us ? All the recipes we consulted said that one could push the dough through a colander or slotted spoon instead, and of course we had plenty of those...so we confidently mixed up dough and started water boiling. And oh, my stars and garters...what an absolute mess. The dough absolutely refused to be pushed through anything - it just sat there all sticky and sullen. Not to be outdone by a mere mess of dough, I just added more flour and we commenced with the hand rolling...took forever, but we got there. And in a repeat of our first Christmas together when we unknowingly got each other the exact same gift (Irish knit sweaters), this year we got each other...spaetzle makers. And now you know why this is also a Christmas story. Merry Christmas, honey :) 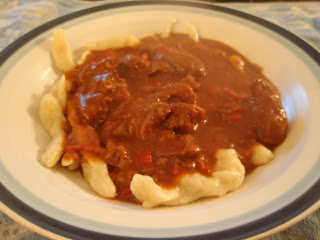 Yes, you can make this with beef...but if you can get your hands on some venison, by all means try it. You won't be sorry !

Heat 1 tablespoon of the of the oil in a large heavy soup pot. Combine the flour, salt and pepper in a large bag and toss the meat cubes in the mixture. Brown the cubes in batches and remove to a bowl , adding another tablespoon of oil to the pot as needed.

Once the meat is browned, add the remaining oil to the pot and heat. Add the onions and garlic, and cook until onions are starting to get a bit soft. Add the paprika, thyme and caraway and cook another 10 minutes or so, until the onions are translucent. Add the wine, beef stock and reserved meat, and stir well. Let simmer on low heat for about an hour. Add the peppers and the tomato paste and simmer another 45 minutes or so, until everything is done to your liking. Add salt and pepper to taste. Serve over egg noodles or spaetzle

This is basically the Frugal Gourmet's recipe, with a lot more flour added and hand rolled instead of pressed. Once we learn how to use the spaetzle makers, expect an update :)

Using an electric mixer, blend the eggs, lard or oil, water and milk. Stir the flour together with 1/2 tsp of the salt and the baking powder in a dry bowl. Blend this mixture into the liquid. Mix well and let rest about 15 minutes .

Pinch off pieces of the dough, and roll into cylinders about the size of a pencil. Cut the "pencils" into thirds, and lay out on a large board or platter to dry a bit.

Bring 4 quarts of water to a boil and add 2 tsp of salt. Add about 1/4  of your spaetzle - do not crowd the pan. The dumplings will float to the surface...let them cook about 4 - 5 minutes, or until done (taste testing is the best way to know - when then stop tasting like raw dough, they are done.) Rinse with cold water, and toss with oil to prevent sticking.
Posted by Karen at 1:58 PM 1 comment:

Because I can. And because we're having duck for Christmas dinner. More posts coming soon, I promise. Merry Christmas, internets ! 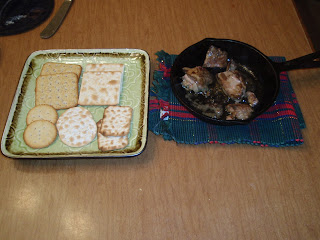 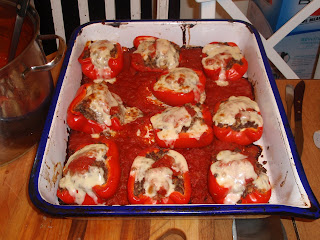 Stuffed peppers are one of those things that I really just never got into. Hamburger, rice, green peppers...all perfectly fine on their own, but stuff them inside each other and for some reason they just become...NO.  But I am here to tell you, readers, that I have had a pepper revelation. Even now, I am plotting how to get more of their tasty deliciousness in my mouth. I am obsessed, thanks to a new appetizer at my favorite local restaurant and an influx of what is possibly the best sausage I have ever eaten.

First, the restaurant - Fiorella's. I have written about Fiorella's before - an absolutely top-notch Italian place that is literally within walking distance of my house. They recently expanded their space (very well done - still neighborhood and homey, just a little more of it) and revamped their menu slightly. On our first visit after they reopened, we went out on a limb and tried one of their new appetizers : Stuffed Peppers Parmigiana. Red peppers stuffed with DePasquale’s hot Italian sausage, risotto, cheese...topped with their amazing marinara sauce & more cheese. (DePasquale's is a small family run sausage shop in Newton...could write a whole post about them ! No website though). These peppers were absolutely astounding - sweet, hot, cheesy, peppery goodness. Oh, man.

Second, the venison sausage. The men in my family are serious sportsmen, and my son Alex is no exception (our exploits with his wild turkey are here). This year, he got his first deer - a three point, 128 pound buck, for those keeping track. The place the guys used to use for meat cutting is now closed, but Alex was able to find a new one - Parents Meat Cutting, in Belmont NH. Venison can sometimes be gamey, but if you find a butcher that knows what they are doing (for example, NOT freezing the thing and cutting it on a bandsaw) and you have a fairly young deer, fresh venison is truly Culinary Orgasm material - and this place definitely knows what they are doing. They offered to turn some of the meat into sausage for us, and Alex wisely said yes. Oh, happy day ! 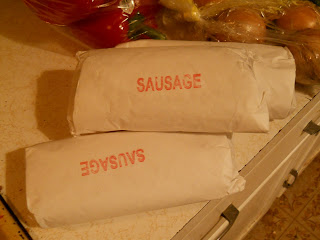 We used some of this sausage in our Thanksgiving turkey stuffing this year, and I have to say...I've enjoyed a lot of sausage in my time, and this is truly some of the best sausage I have ever eaten. You can see how dark and rich it is in the picture above...it's lightly spiced, but whatever was added to it, it was done perfectly.

A new respect for stuffed peppers, and a supply of amazing sausage...this recipe was just screaming to be made. Who are we to ignore the siren call of the kitchen ?

Preheat oven to 375. Heat oil in a large skillet, and brown the sausage meat in it. Combine sausage, breadcrumbs, and Parmesan, and mix well. Stuff into peppers, and place in large baking pan to which you have spread 2 cups of the sauce in the bottom of. Bake for 30 minutes, then arrange cheese slices over tops of peppers and bake 10 more minutes or until cheese is melted.
Posted by Karen at 11:35 AM No comments: