Seriously, I think the hardest part of this dish - both making it and writing about it - is the name. There's just no way to make "jook" or "congee" sound like a Culinary Orgasm (and forget about rice porridge...who wants to eat porridge ? Isn't that what Dickensian orphans eat ? ) The nearest translation my culinary mind could make was "Asian risotto", but even that isn't close (especially since Asians will eat this for breakfast, lunch and dinner). Alex dubbed it "Chinese Chicken and Dumplings", since the version I made has many of the same ingredients as my Chicken and Dumplings  (chicken thighs, mushrooms, peas) ...and since I served it with some potstickers I happened to have on hand. Whatever you want to call it is fine with me, as long as you call it home to supper !

Jook (or Congee) at it core is just rice cooked in a lot of liquid until it is very, very soft . Nearly every Asian country claims some version of this dish, from the Indian kanji to the Filipino lugaw. It can be eaten plain, or with any variety of sweet or savory topping known to humankind - milk and sugar, nuts and vegetables, chicken, fish, or any other meat you fancy, and whatever kind of spice or sauce you can dream up (in fact, many people say it's all about what you top it with). It's the ultimate comfort food - what your Chinese grandma would make you when you were sick, if you were lucky enough to have such a thing. (A Chinese grandma, not a sick ! ).  Indeed, it was while researching "soft food" that I came across many, many people recommending it as just the thing (as to my research....there's a long story there involving a bicycle, some pavement, and my poor husband's face :( ). I knew about jook/congee already, what with my addiction to all things cookery...but had never tried to make or eat it. Here, then, was the perfect opportunity to see what all the fuss was about. As to the results...well, the patient ate three bowls of it that night, and four days later is looking MUCH better...apparently those Chinese grandmas know their stuff !

A few notes on what I used for my particular version :

I was a little concerned about using my beloved Uncle Ben's rice, as I wasn't sure if the conversion process would leave the rice with not enough starch. As you can see it came out perfectly creamy; I think for my next batch I'm going to try some of the Texmati or Jasmine rice I always have on hand (was originally worried they would be too flowery, but now that I've had it I really don't think that will be an issue). The nice thing about this one is that you don't have to obsess about the perfect rice-liquid ratio : the idea is for it to be creamy and soupy, but it's really up to you (that's why I give a range of liquid; you can always add more if it's not the consistency you like ). Oh. and this probably goes without saying, but don't try this with Minute Rice. (Not that I ever use the stuff but hey, we don't judge around here ! )

Garnishes are up to you - I put out bowls of chopped cilantro, sliced scallions, and diced cooked sausage that I had warmed up in a pan. Many recipes call for cubes of cooked bacon and/or deep fried or sautéed onions or shallots - both of which I will try at some point as I think they both sound divine. Chopped peanuts were also mentioned by many...I'm not a huge peanut person, but I think I may try that as well.

I also put out a few of my favorite Asian sauces...


So the next time you're looking for Chinese comfort food...consider the humble jook. You'll be glad you did ! 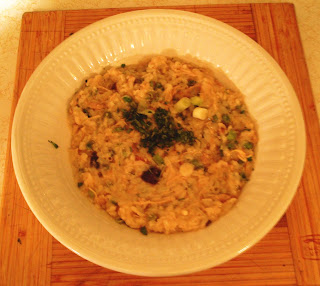 Garnishes (see above) - chopped cilantro, sliced scallions, anything else that sounds good plus your choice of sauce(s)

Pull the skin off of the chicken thighs, and place in a large pot. Cover with 4 cups of water and 4 cups of stock, then add the rice, ginger, salt and pepper.  Bring to a boil, reduce heat and simmer uncovered for an hour until the rice is very soft creamy, stirring occasionally.

Remove the chicken thighs and set aside to cool a bit (so you can get the meat off without burning your fingers). Stir in the mushrooms and the peas, adding more stock and water if needed (you're going for a thick soup sort of consistency). Let the jook simmer to cook the mushrooms while you get the chicken off the bones and shred the meat (two forks work great for this). Add the chicken back to the pot and stir, adding a drizzle of toasted sesame oil and more salt and/or pepper to taste. Once everything is heated through to your liking remove from heat and serve, passing the garnishes at the table