For years, we have been looking for something to do with the drumstick and wings of our wild turkeys. Leave it to Hank Shaw to come up with the delicious, delicious answer.


When the resident hunters started bringing home wild turkeys years ago, we wanted to do them justice; we had heard the meat was tough, but we were no amateurs in the kitchen…there had to be a way to tame this wild beast (so to speak). Our first attempt was to do the whole thing on the smoker/grill; as I recall we even tried to brine the meat beforehand for optimal results. All day long it smoked…eagerly we waited for the delicious-smelling meat to be done, and indeed, the breast was delicious; lightly smoky and juicy. Try as we might, though, we couldn’t get a bite off the drumstick; it wouldn’t tear off no matter how hard you pulled. As for the wings, you couldn’t even find a place to start the attack; there appeared to be no meat at all. So, we resolved to use the smoked parts as ingredients in other dishes; beans and greens both get along with smoked poultry parts beautifully, and we love those sorts of dishes around here. The breasts and thighs eventually found their way into dishes like chili verde…but the drums and wings were mostly just a sad afterthought.


Flash forward to last year, and a fortuitous set of circumstances; a pair of wild turkeys in the freezer, and an extremely timely post from Hank Shaw (Hunter Angler Gardener Cook). I love, love, LOVE this man…have been reading his blog for years and have a few of his cookbooks. He has the same love of both good food and the outdoor life that holds our family together, but he’s a million times more talented. We actually got the chance to meet him when he was on a book tour this past fall; he is just as cool and nice as he comes across in his writing (though I’m sure he thinks we’re crazy, what with M’s ideas about hippo raising…don ‘t get me started on that !) Hank posted about carnitas, that Mexican dish of “little meats” – usually pork, cooked low and slow until falling apart tender and super delicious. Hank’s was made with turkey – wild turkey, to be exact, and specifically the legs and wings. If Hank said they were edible (and delicious), it had to be true…and so I set out to make it. Four hours later we sat down to try it…and OMGWTF, what a Culinary Orgasm. Tender, delicious, unbelievably good on its own, killer in a sandwich, and absolutely spectacular in tacos…this is some seriously good meat.

Basically, all I did here was to change around the spicing (as I really don’t like juniper)…otherwise, this is all Hank. If you don’t have wild turkey I think a regular legs and wings would be fine; someday I’m going to try pork as well…if I can ever stop eating this! 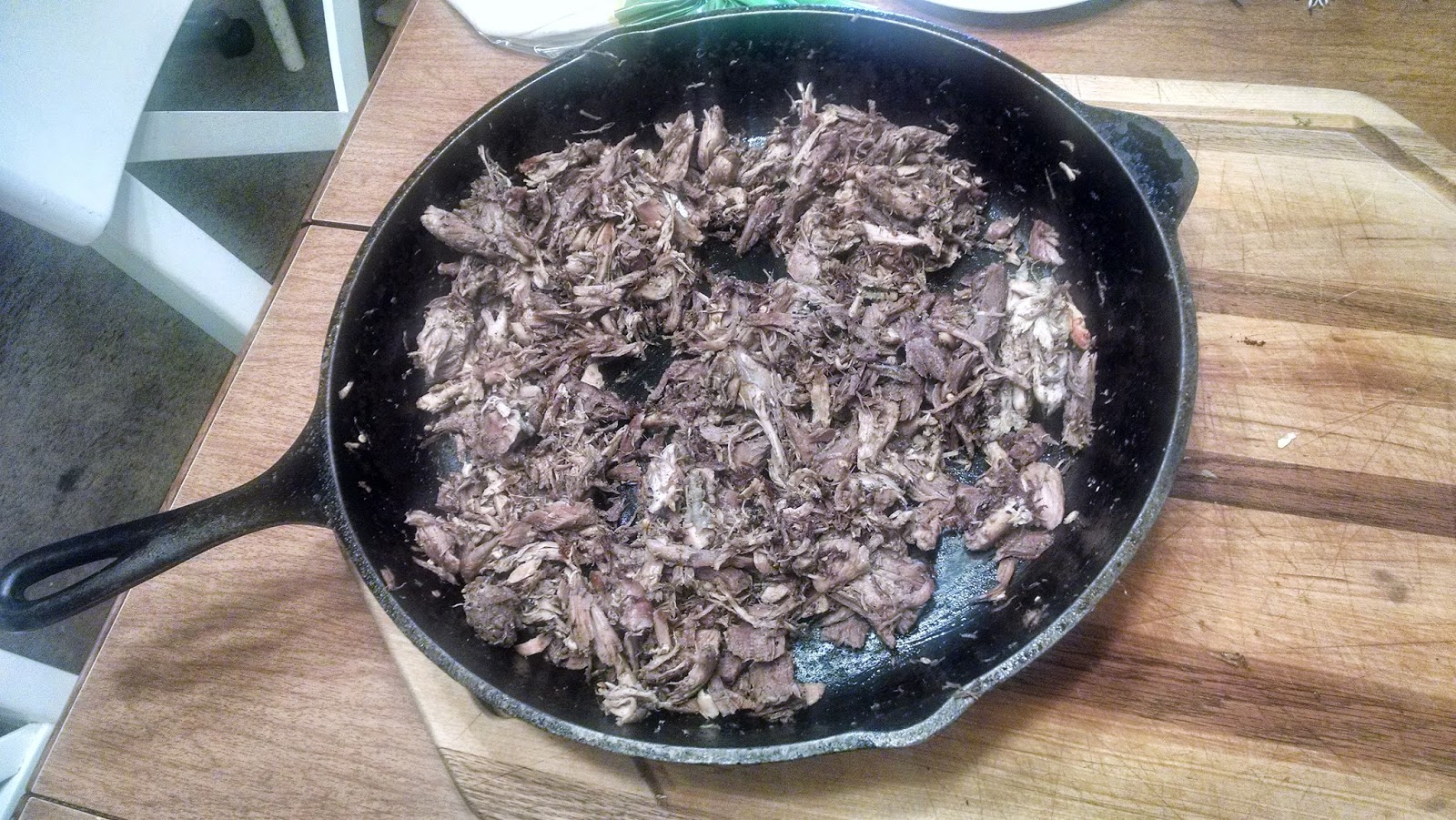 Note on the whole or lightly crushed spices: if you have a tea infuser or cheesecloth to make a little packet with, use them – easier than picking out whole peppercorns later!
Remove the skin from the turkey. Put the turkey in a large Dutch oven or large lidded pot; add all the herbs, spices and enough water to just barely cover the meat in the pot. Cover and simmer for 3 to 4 hours, or until the meat is falling off the bone.
When the meat is tender, remove from the pot and let it cool. Shred with two forks or your fingers. Discard the bones and any tendons. You can store the meat for up to a week at this point.
When you want to serve the meat, add the lard (or oil) to a frying pan and brown the meat as much as you like. At the very end, drizzle in some honey to taste (trust me, it tastes REALLY good) the juice of half an orange. Mix and serve – as the meat in a taco with your favorite fixings, on your tostada or nachos, in a burrito or enchilada, in a sandwich, or just on a plate…the possibilities are endless!