This post found inspiration in so many places, I hardly know where to start...

I discussed my family's love of the "Song of Fire and Ice" series (better known in TV Land as "Game of Thrones") in this post , as well as giving a brief history of trenchers. We've also discussed our love of fishing in a few places (notably here and here ).  So when a dear friend pointed me to an entire blog of recipes from the books via a recipe for this amazing stew, I had to check it out. The blog is fantastic, if you're a fan....it's called Inn at the Crossroads , named after a location in the books that's seen its share of drama. And the stew...oh, the the stew. The Sisters (in the books) are three islands - and apparently they make one heck of a stew :


“The beer was brown, the bread black, the stew a creamy white. She served it in a trencher hollowed out of a stale loaf. It was thick with leeks, carrots, barley, and turnips white and yellow, along with clams and chunks of cod and crabmeat, swimming in a stock of heavy cream and butter. It was the sort of stew that warmed a man right down to his bones, just the thing for a wet, cold night…”
-George R.R. Martin, Dance with Dragons

Pretty much says it all right there.

The recipe as written in the blog (entry here) really looked pretty fantastic (OT: it was actually a guest post from another blog about Diana Gabaldon's "Outlander"series - another one of my faves !). I made some minor changes, as I come from a long line of chowder makers and have some definite firm opinions about what goes in a good chowder . The changes include swapping in some potatoes for part of the turnips as I'm not the hugest turnip fan out there (though we had to keep some for authenticity), added some nutmeg and cloves as they were referenced in the book (again with the authenticity...plus they compliment the heavy cream so well), and some other minor changes. The biggest changes I made, though, were to start the vegetables in salt pork instead of olive oil (no self-respecting Down Easter would use anything but) and to swap our own excellent homemade fish stock for the water and clam juice.

Our stock recipe is at the end of this post...now, granted, if you're not a crazy fisher-person like the people who live here you may not have giant fish heads in your freezer...that's just how we roll :) You can sometimes find heads for stock making at your local grocery store or fish market, but if you don't see them, ask - they'll be able to recommend something. 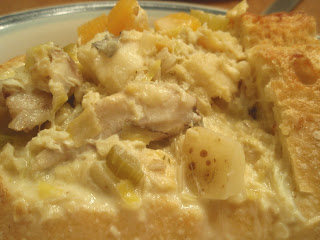 Sister's Stew
adapted from Inn at the Crossroads


Fry salt pork in a large pot over medium heat until toasty brown and the fat has been released (this is called "trying out"). Remove salt pork from pan, but leave fat in there (you can drain the cubes on paper towels and retain for garnish if you like that sort of thing,, which we do...be warned the bits are very salty though !) Add the leeks, carrots and celery to the hot fat in the pot and sweat until tender, 5-7 minutes. Add the garlic and barley. Stir constantly until fragrant, about 2 minutes. Deglaze with wine and reduce until almost dry. Add the fish stock, potatoes, turnips and thyme. Increase the heat to medium-high and bring to a boil. Reduce to medium-low and simmer until the vegetables and barley are almost tender, 30 minutes. Remove the woody thyme stems and add the cod. Simmer for 5 - 10 more minutes, or until the cod is almost cooked,

Warm the cream gently in a small saucepan then add the saffron, rubbing the threads between your finger tips to break them up slightly. Add the nutmeg and cloves, then stir the cream into the stew. Add the crabmeat, clams, and butter . Cook for another 5 minutes, stirring gently once or twice, until the fish is done and and the butter is melted. Season with salt and pepper, and garnish each bowl with a few cubes of salt pork (if using. )

Serve hot with plenty of freshly ground pepper and black bread (or, if you really want to go for it , serve in hollowed out large rolls or small bread loaves) 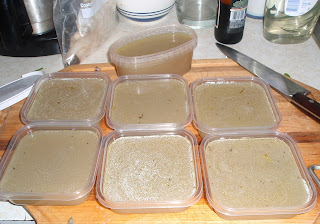 Add the hot water, stir gently and bring to a simmer over high heat. Reduce the heat to low and simmer gently for 30 minutes, stirring occasionally. Remove from the heat, stir once and let stand for 10 minutes. Strain the stock through a fine sieve. Season lightly with salt and let cool, then refrigerate or freeze until needed.

Note : Depending on the size and species of your fish, you may have some lovely meat left over when the stock is done - cod cheeks from a large cod are particularly tasty. Feel free to retain this meat and stir it into your final soup/stew/chowder/what have you...
Posted by Karen at 9:04 PM 4 comments: 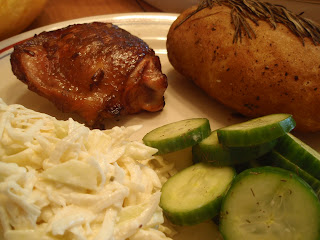 It feels a little…well…guilty to be celebrating spring this year. Here in the Northeast, we really didn’t have much winter to speak of – well, any winter, actually. One snowstorm in October does not a winter make, not in the land where the Blizzard of ’78 is discussed like it was yesterday - along with the April Fools blizzard that had us thinking the Patriot’s Day Boston Marathon-Red Sox home game doubleheader was in jeopardy. This April, though, it’s sunny and almost 80 in my backyard as I write this – and I’ll take that any time. There’s always next winter to get my suffering back on :)


Today’s grill fest starts with a recipe I found ages ago for Shaker-style smoked chicken thighs (which I rediscovered when I was cleaning out my recipe box last week - that’s a process in itself. In addition to my zillion cookbooks, I have a box full of loose recipes dating back to when I was a kid. Every so often it threatens to take over the kitchen, and I have to reign it back in). I’m not sure what makes this “Shaker-style”, but when I saw it involved chicken thighs I knew I had to try it out. I love cooking with chicken thighs – they’re so much more flavorful and juicy than boneless skinless breast (that stuff is practically tofu…tastes like nothing until to you do something to it.) The meat is dark, but not dark enough not to scare off the dark meat haters. I use the thighs in all sorts of things, including my chicken and dumplings, and I haven’t had anyone turn them down yet. The original recipe from EatingWell.com called for boneless skinless thighs, so if you are really averse to using the thighs I do think the breast would work. I adapted this to use the bone-in, skin-on thighs as I like the juiciness you get from using the whole part.  It does take longer to cook this way, but I think the results are well worth it.
<><><><><><><><>
As for the side dishes, the potatoes are something I make for the grill all the time, and they couldn’t be simpler. Wash baking potatoes well, stab them all over with a fork, and lay them on some foil. Brush them with good olive oil, and sprinkle with a few grinds of pepper and a few shakes of salt. Tuck a fresh rosemary sprig in with them, and wrap them up tight.  They take about an hour at typical oven temperatures, but if you are smoking instead of grilling then they’ll take a few hours. You can tell they’re done if they give when you squeeze them.
Oma’s cucumber salad is a traditional German dish that I grew up eating, though nowadays I think I have access to better cucumbers than Oma did! It’s basically a quick, fresh pickle – sliced cucumbers marinated in vinegar with a little salt, white pepper and sugar added. This basic marinade is also great with other vegetables – leftover green beans are awesome in it. My favorite cucumbers to use are the baby ones that I get at Russo’s, though a good English cucumber will work as well.
That brings us to celeriac, or celery root - one of the weidest looking vegetables you will ever see. I wrote about celery root in my Oktoberfest post, but it's just so fun I have to write about it again.
The roots themselves are pretty scary looking, sort of alien potatoes with tentacles – but under that woeful exterior is one of my favorite food items ever, with a fresh, light celery flavor that compliments pretty much anything.The remoulade is something I’ve been dying to make ever since our friend Jonathan made it for our last Facebook Foodie Freakout. I grew up eating celery root – but in the German style, Selleriesalat (see the Oktoberfest post for the details.) Great stuff, but when Jonathan showed up with the remoualde I was intrigued. I knew that celeriac remoulade was a classic French dish, but I didn’t quite realize that it used raw, grated celery root. One bite, though, and I was hooked. A lemony, mustardy mayonnaise with that great celery root flavor and a wonderful crunch – sort of like the best version of coleslaw you could ever want to eat. 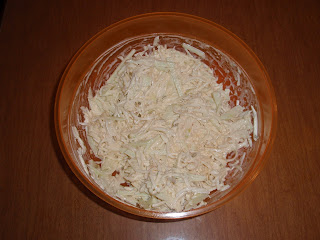 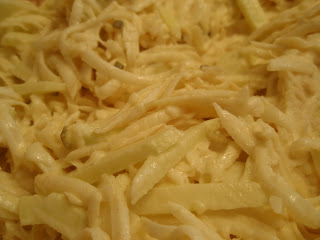 Yeah, I’m very okay with this whole celebrating spring thing – especially when it gives us an excuse to put on a meal like this one. BRING IT!! :) 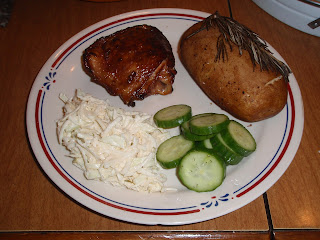 Whisk marinade ingredients together (everything but the chicken), and pour over chicken in a large Ziplock bag or large bowl. Toss or shake to coat, and refrigerate for at least 30 minutes (a couple of hours is even better).  Smoke according to your smoker’s directions, or use a foil packet of soaked wood chips on your grill. Cooking time for bone-in is 1 – 3 hours, depending on how much heat you use. Grilling boneless chicken will only take about 6 – 8 minutes per side.


Wash potatoes well and prick with fork. Wrap in foil with remaining ingredients. Bake on the grill at 400F for an hour, or longer if you use a lower temperature.


By all means, if you want to use homemade mayonnaise in this, go for it! Hellman’s, though, is mighty tasty and a lot less work.

Wash, peel and trim the celery root. Grate using the largest holes in your food processor or box grater. Toss the grated celery root with the salt and 2 tablespoons of the lemon juice. Set this aside for about 30 minutes at room temperature.

Meanwhile, whisk together the remaining ingredients (except the apple) until well blended. Stir in the apple and the celery root.  Taste and adjust for seasonings (salt? More mayo? More lemon? You be the judge!).  Let sit in refrigerator a few hours to blend the flavors, then serve.


There are two versions of this salad in Germany – a sour cream version, and a vinegar one. This is my version of the one my Oma made for us growing up.


We prefer the peel left on, but taste a bit to make sure the peels aren’t waxy or bitter – peel if needed. Slice cucumbers somewhat thinly (pickle sized slices are what you’re after).  Whisk together remaining ingredients, and pour over cucumbers. Let sit in refrigerator at least an hour before serving.
Posted by Karen at 7:33 PM 1 comment: