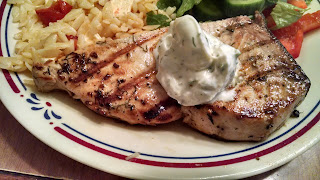 This one has a little bit of a backstory, if you'll indulge me...don't worry, it will eventually get there !

Even though I grew up surrounded by fantastic cooks, there were quite a few dishes that I never got around to trying (or appreciating - exhibit a, corned beef) until I met my husband. One of these, surprisingly, was lamb. I'm guessing this was because of some combination of the good stuff being expensive, and the cheap stuff being...not so good (and therefore not something anyone in my family wanted to eat). Whatever the reason, it wasn't until I met Mark that I beheld the wonder that was lamb...specifically, lamb gyros. Fluffy pita bread, filled with deliciously grilled lamb marinated in something I couldn't quite identify...this was takeout food like I'd never seen before. And the sauce...oh, the sauce. Cool, creamy, garlicky goodness. I had no idea what it was, but that didn't stop me from gobbling it up whenever I got the chance. 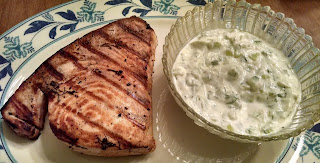 Fast forward a few years, and I had the good fortune of working down the street from a great little Greek food spot in my own hometown - the Farm Grill . Despite the name, which makes it sound like - well - "farm" food, this is actually a counter-serve Greek restaurant with some seriously delicious food - and, from what my actual Greek friends tell me, the stuff is pretty legit. I remember we used to get our Greek coworker to call whenever we ordered lunch from there, figuring they would be nicer to her...not really known for their warm and fuzzy service, but the food is worth it (even if you don't have an obliging Greek coworker...Effie, I miss you ! ). When you walk in, you immediately see - and smell - the gyro meat, rotating on tall vertical rotisseries. I could write a whole post about Farm Grill, but the important bit for this story is the gyro - for this is where I discovered this delicious sauce was called "tzatziki" At this point I still wasn't quite the crazy foodie I am today, but I was definitely on my way...a little knowledge can be a scary thing ! 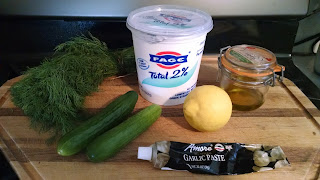 My next flirtation with tzatziki was in the early days of this blog...well it wasn't actually tzatziki, it was a cucumber raita - the Indian version which is a close cousin (but without the dill and garlic seen above). As noted in that entry, the guys weren't really enamored of it, so I didn't make it again...but I didn't stop thinking about tzatziki.

And then, there was the bluefish.

Earlier this summer, the guys went on a fishing trip for striper...except no one caught any keeper striper. They did, however, catch tons of bluefish - and my guys being enterprising, resourceful boys decided to bring all of it home...not only theirs, but their boatmates as well. Unfortunately, what they didn't know at the time was that you really can't freeze bluefish - bluefish at its best takes a little work to achieve Culinary Orgasm status, but frozen is just no good - it turns into an unappetizing mush. I, however, did know this - and slightly panicked at the sight of 10 pounds of bluefish fillets that had to pretty much be cooked in 24 hours ! Half of it immediately went into brine for smoking (delicious - will try and get that on the blog at some point), some was transformed into Vietnamese Caramel Bluefish that night ( also delicious and in need of some blog love; I based mine on this recipe ) The rest was destined for the grill the next day. I knew it was going to need some sort of sauce, and mustard sauce  - my traditional favorite on blues -  was out as my husband hates that particular combination.(Okay, full disclosure - I did make a little mustard sauce just for me :) ) . The time was ripe for me to get a good tzatziki under my belt...not that I'd ever had it with bluefish before, but I somehow knew that it would be a match made in heaven. And oh man...was it ever ! 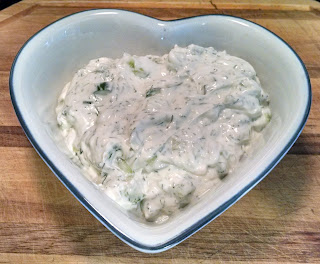 Bluefish is such a strongly flavored, oily fish that it needs something bright to cut it...and tzatziki is definitely that; lemony, garlicky, herby brightness. That's why it works so well with lamb...but really, it good on all kinds of stuff. Any kind of meat or fish you can think of (burgers ! chicken breast ! the mind boggles)...killer on a baked potato...spread on pita bread...or just eaten with a spoon.  I think the main difference with the version I make now is the yogurt; real Greek yogurt is essential to this dish, the runny American stuff just won't cut it. That, and make sure you use fresh minced garlic; I was out the day I photographed this, so I used the paste...not nearly as good. (How the heck does a foodie run out of garlic ! grrrr...)

Since I don't have pictures of the bluefish dinner, you're getting the next best thing - a simple grilled swordfish that we did tonight. Nothing fancy here, just marinated it in a little olive oil, lemon juice, salt, pepper and dill; grilled on a super hot fire about 5 - 6 minutes a side. The tzatziki is the real star here - true Culinary Orgasm ! 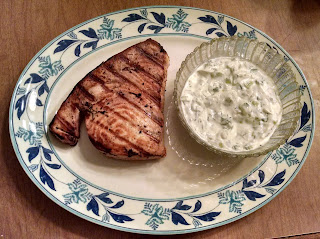 Fat content on the yogurt is personal preference, but I personally find this work best with 2%.

Mix all ingredients, adding salt and pepper to taste at the end. Let sit about an hour to really let the flavors blend.
Posted by Karen at 9:36 PM No comments: