I know, I know..."lazy" probably isn't an adjective that comes to mind when one thinks about my cooking...not in any way, shape or form. Surprisingly, though, I do like to do things other than cook (it's true, I swear !!) And one of the things I really like to do is be outside, particularly this time of year when the weather starts getting nice. I'm always on the lookout for recipes that meet my criteria when I find something that looks like a sweet, delicious Culinary Orgasm , yet actually gets me out of the house and into the sunshine. Not only does this tart get me into the sunshine...it IS sunshine. I mean, just look at it !!

Variations on this tart have been popping up in my internet perusing for some time now - most recently in the form of "Lazy Mary's Lemon Tart" (thank you to my friend wild apache for pointing me towards that particular gem). Smitten Kitchen also has a few variations on this theme...this tart , and a bar recipe in Deb's wonderful cookbook.  The theme, though, is a bit weird in that it involves whole lemons. Not just the juice and zest, but actual, whole lemons - you don't do a dang thing to them, other than barely cut them. And that's not the only thing that makes it lazy...said whole lemons are simply thrown in a blender or food processor with the other filling ingredients (which only consist of butter, sugar and eggs), processed into oblivion, poured into a shell, and baked. Doesn't matter what temperature the butter is, no egg separating, no nothing - mix and go. This is totally bizarre - well to me anyway. I'm the mistress of complex desserts - the more steps and more elaborate, the happier I get. When I play with lemons, I get crazy - recreating restaurant cakes, or making delicate souffles. Mix and go ? Are you crazy ? Well, yes I am...and this one came with enough provenance that it was worth getting my crazy on. And this thing is CRAZY good.  The filling is light, but not overly so...nice and lemony, but not overly tart. It's delicious plain, but dresses up pretty too (whipped cream, raspberries, glazed almonds....whatever moves you.

1 1/2 cup superfine suger
1 stick butter
4 eggs
1 partially baked tart shell, your favorite (mine is here )
Put all filling ingredients into a blender or food processesor, and process until smooth.
Pour into tart shell.
Bake 35 - 40 minutes at 350 degrees  , or until filling is set (should barely jiggle) and top has just started to go a very light brown.
Let cool completely before serving. 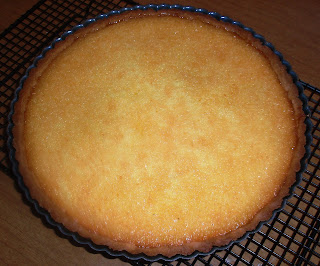