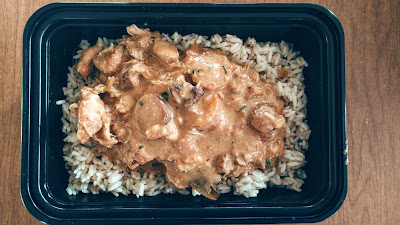 O-M-G, you guys. Seriously .  We ate this so fast that there wasn’t time for any other pictures …sadly, this was the only photo I could snap; it’s of the leftovers being packed for my son’s lunch. That kid is lucky I like him so much !!


I’ve made no secret of my love of Cooking Light recipes over the years; I’ve adapted many of them, and made many more just as they read (or with very slight tweaks.)  I think the reason they usually work so well is that they’re not “light” recipes; they’re real, honest to goodness recipes that use real ingredients and tested, normal cooking methods. They’re lightened up just enough to fit into a healthy lifestyle, but not so much as to be rendered flavorless. (No, they’re not paying me to say any of this…I wish !)

Korma, if you’re not familiar with it, is an Indian dish of Mughal extraction that is basically a type of curry; it’s an excellent gateway drug for people that don’t think they like Indian food….creamy, silky, warm and comforting.  It’s very easy for this dish to go off the rails calorie-wise; traditional recipes usually call for the chicken to be sautéed in butter, and for full-fat yogurt to be stirred in at the end. Nuts and/or cheese are added to some recipes as well, just adding to the calorie load (and overall deliciousness, I’m sure !). The good news is that korma also adapts itself extremely well to slightly lighter ingredients; between the spice level and all the time getting happy in the crockpot the finished product is so flavorful and tender you’ll never realize there could be more fat in it.

I did tweak this recipe very slightly, of course…this is me we’re talking about, after all J (link to the original recipe is provided below). The biggest change I made was to up the amount of curry powder as well as use a spicier version; my now-extensive experience with the crockpot has taught me that flavors can really get muted after spending all day under low heat. If you are spice-adverse by all means use a milder curry powder and/or cut down on the amount of chili paste…not looking to kill anyone with fire here. (Conversely, if you love the heat then pump that @#%& up !) . I swapped in sambal oelek because I absolutely love the stuff, but crushed red pepper would work just fine; these can also be added to each individual bowl at the discretion of the diner, if you’re cooking for a mixed crowd.

The other important change I’ve made here concerns the yogurt. The original recipe calls for fat-free yogurt and did not specify Greek style, but I really think a thicker yogurt is called for…plus, let’s just be frank :  I am not a fan of the aftertaste of fat free yogurt (when they take something out, they put something in…and whatever it is, I don’t like it). The difference in calories and fat (and WW points) between half a cup of 2% and half a cup of 0% is negligible, particularly when spread out over eight servings; the results are so much better with the creamier yogurt that it’s well worth making the swap. I’ve also included a step for “tempering” the yogurt, which simply means bringing up the temperature slowly before adding it to the final dish. This easy, quick step will prevent the yogurt from curdling when you add it; there’s nothing wrong with curdled yogurt, it just doesn’t look all that great (and you won’t get a smooth, creamy sauce).

Naan bread (optional) is basically the Indian version of pita bread, but lighter and fluffier; it’s available in many supermarkets (Stonefire is a pretty good brand, easy to find and mighty tasty. No, they don’t’ pay me either J ). This dish already involves rice and potatoes so bread is kind of overkill…but it does make the perfect vehicle to sop up the last bits of the lovely sauce. If you can find it and don’t mind the extra carbs it’s a nice addition; definitely not necessary though.

We really enjoyed this one…hope you do too !


Cover and cook on LOW for 6 hours. Discard bay leaves and cinnamon stick. Turn slow cooker off; let stand 15 minutes.
In a small bowl, combine the yogurt with a few spoonfuls of the hot liquid from the crockpot. Once this is combined, stir the yogurt mixture back into the crockpot, and sprinkle with cilantro.
Serve chicken mixture over rice, with optional warmed naan bread on the side for dipping.