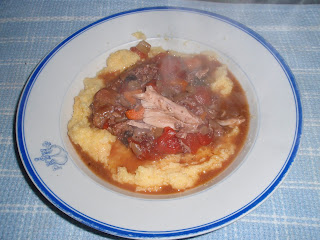 My family - husband and in-laws included - all seem to have a very, well, perverse sense of humor. In the midst of preparing a three-day demiglace (more on that in the next post), my husband decided that we absolutely must have rabbit stew...the day before the Easter Bunny was due. Not that we'd ever made rabbit stew before, mind...took us 5 stores to find the rabbit (H Mart was where we finally hit the jackpot), but make it we did .

The recipe Mark found online was really rather spectacular, and can be found in its entirety here :

The one thing I didn't like about the recipe, though, is that it lacked a recipe list, so I am taking the liberty of writing it up here, with the minor modifications that we made. We did serve it over the polenta as suggested - which was fantastic - but mashed potatoes, egg noodles, spätzle or gnocchi would all be wonderful with it as well.


Alpine Rabbit Stew
2  onions, chopped
5 celery stalks, chopped
8 oz air-dried bacon (we used pancetta)
2 bay leaves
juniper berries (we used a small handful of dried blueberries – a teaspoon of whole allspice would have been better though)
2 large cloves garlic, minced
Cinnamon stick
5 chopped carrots
Fresh thyme, marjoram and rosemary – a sprig of each, or to taste
half a bottle of red wine (we used Italian red table wine)
a can of tomatoes (we used a can of diced San Marzanos)
2 rabbits, cut into large pieces
½ cup chicken livers (unless you can find rabbit livers  !)
Gently fry the finely diced bacon with a little butter for about 3-5 minutes or until soft.
Carefully lay the rabbit into the pot so that each piece of meat will lay on the pot bottom. If they don't fit, do this in as many batches as it takes. Add the remaining rabbit pieces and continue to sauté over high heat.
Salt the rabbit and set aside.
Add the onions, garlic, celery, carrot, cinnamon and bay leaf to the bacon. Fry over medium-high heat, moving constantly.
Add the chopped liver and let it color. It will turn from red to grey.
When the liver has turned in color, add the wine and let it bubble.
Add the tomatoes and the herbs.  Add the rabbit, bring to a boil, cover and reduce to a gentle simmering. Let it cook for at least one hour or as long as it takes for the rabbit to be really soft.
Serve over…whatever you like J