Last night, we decided to try The Melting Pot...neither of us had been there before, and we had errands in the area. Plus we're both off work today, so a late dinner worked out just fine. Usually I am not a fan of chains, but enough people had said good things about this one that I was willing to give it a shot.

The evening itself was very enjoyable - the atmosphere is great, the booth we were in was really intimate and private, yet elegant. If you're not familiar with The Melting Pot, it's a fondue restaurant - your table has a built-in cook surface, and most of the dishes are cooked in a pot right at your table. Our booth was a cosy corner, high backed, with a curtain you could close for privacy (not that we did, but one could :) ) . This made for a very relaxing meal. And our waiter was absolutely charming and very knowledgeable.
The food itself, though...well, it just doesn't cut it for me, foodie-wise. It's pretty pricey (our four-course meal was $86 per couple, plus wine, etc...and that was one of the more inexpensive options). I definitely do not have a problem paying that much - and more - for a meal, but there's much better places to spend that kind of money. It was good, just not *that* good !

The dinner we chose was the "Big Night Out - France"...cheese fondue, salad, main course and dessert. We started with the Fondue A La France - described as " A rich, smooth combination of baby Brie, Fontina, Gruyère and Raclette cheeses accented with Nueske’s bacon, onions, white-truffle cream and fresh chives"  This was very good (even though I saw no evidence of bacon) - but I have to say that  Sprigs , in Acton, does a Brie and truffle fondue that is so amazingly, orgasmically good that you want to lick the table in case you dripped any. Still, it was a perfectly nice fondue, with tasty bread to dip as well as green apple slices - which I didn't expect but enjoyed very much. There was also a little crock of vegetables - carrots, cauliflower and broccoli - not very fresh, so we didn't eat much of them. 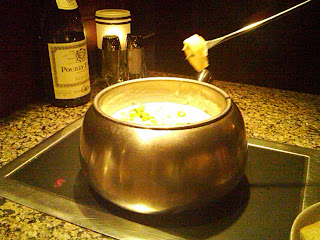 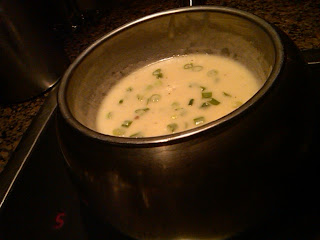 ﻿The next course was the salad - a Salad Niçoise : 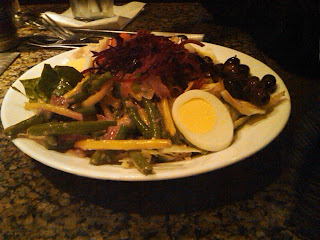 This was actually excellent - haricots verts (marinated tiny green and wax beans), tomatoes, hard-boiled egg,  and Niçoise olives topped with a tangy Shallot Vinaigrette. There were also some shredded beets, as you can see....I am not a beet fan personally (one of the very few things I don't like), but my dining partner assures me they were just fine. Whatever, dude :) They were easy enough to remove and didn't bother me in the slightest - so really, a fantastic salad.

Then, on to the main course... 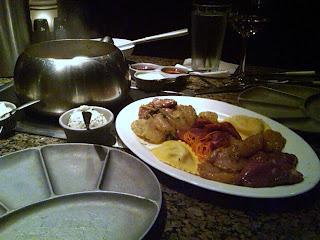 Quite a collection...Filet Mignon, Peppercorn-Crusted NY Strip, Chicken Provençal, Roasted-Garlic Shrimp, Maple Leaf Farms Duck a l’Orange, Ratatouille & Goat Cheese Ravioli, potatoes, mushrooms and broccoli. We chose a Court Bouillon for the fondue part...then basically, it was stab and simmer :). Each person gets two color-coded forks, and the items take anywhere from 2 to 6 minutes. Again the vegetables weren't that great - they may need a better supplier - but the other items were tasty. There were a number of sauces, which we tried on everything : a yogurt-based curry sauce, which was quite good and went well on almost everything but the red meat and duck; a gorgonzola sauce, fantastic on the red meat; a Green Goddess (cream cheese, sour cream, onions, chives and parsley) which was great on the vegetables, a teriyaki which tasted like there was port wine and cloves involved - different and quite tasty; and a plum sauce which was way too sweet for us (though some people love it). A great selection and the sauces were fun to try...but for me, nothing that really bowled me over. My partner found the setup a bit too much work - a lot of awkward reaching - and found that the seasoning on the various items didn't really come through once the item was cooked, as everything kind of washes off.

I should mention the wine...for the first three courses, we had a bottle of Louis Jadot Pouilly-Fuisse. This has been one of our favorite wines for years...a white, but one with plenty of flavor to stand up to just about any kind of food - but doesn't overwhelm anything. Surprisingly, the huge wine selection is very reasonably priced...shocking given the menu prices, but quite welcome. They also had a very cool looking cocktail menu, which I will go back and test drive at some point.

Then, it was on to dessert : 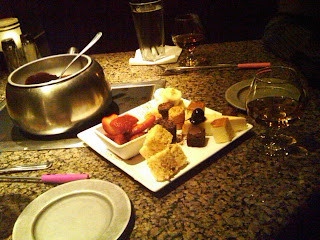 We went with a straight dark chocolate fondue, as we were both in need of stronger libations at that point and wanted something that would go with our choices - Hennessy VSOP for him, Laphroaig for me. Smoky Scotch and chocolate, you ask ? Hells yeah ! It's an amazing combination.

The fondue itself was quite yummy, and the dippers were, again, a pretty cool selection : fresh strawberries, bananas, cheesecake, Rice Krispies treats, marshmallows coated with regular and chocolate graham cracker crumbs, pound cake and brownies. The cheesecake wasn't quite dippable, but we drizzled the chocolate on top and it was mmm mmm good :). Rice Krispies treats were a good idea, but these weren't the best version of them so we weren't a huge fan. The marshmallows, however, were a revelation - this is another food item that I'm not the biggest fan of, but they worked fantastically in the fondue.

In closing...I think I'd definitely go back to the Melting Pot for drinks, or maybe dessert (actually, they have a cheese fondue-chocolate fondue - bottle of wine special that may work)...but I'm probably not rushing back there for a meal - unless someone really wanted to go. Not fantastic, not terrible...a pleasant experience, overall.