Posole - a Mexican stew of meat (usually pork), hominy corn and chili peppers - is one of those dishes that I've wanted to try for years. I'd like to be able to say that the reason I've had posole on the brain was from perusing my vast cookbook collection (which I do have, peruse quite often, and blame for many of my obsessions), or because of the influence of some heretofore unmentioned Mexican great grandma.  I'm afraid I can't lay claim to anything quite so cool, however. I've wanted to make posole because of... Jude Deveraux.

Jude Deveraux is a writer of romance novels, which I've had a secret passion for for many, many years. I'm a voracious speed reader of many genres - history, biographies, sci-fi...and. of course, cookbooks. I also love really good historical romances - there's nothing like throwing the occasional brain candy in the mix to keep things happy (there's a reason we call it "brain candy") Most of Jude's novels are indeed historical, but her later stuff is mostly set in the present (she's pretty much the only author I'll read as far as contemporary romance goes.)  In her book "Sweet Liar" the protagonist Samantha moves to New York and does...well, a bunch of stuff...including making posole that makes people cry  (and go back for more). Ever since I read that, I've wanted to make it. What can I say ? That's how I roll :)

The main ingredient in posole is hominy (itself also sometimes called posole or pozole). Hominy is a pretty cool food product - it's corn that's been treated with an alkali (basically a weak lye solution) in a process called nixtamalization. Among other things, nixtamalization makes the corn easier to grind,  gives it a longer storage life, makes it taste better, and improves the nutritional value. What's really amazing to me is that ancient Mezoamericans somehow figured out that soaking the corn in water treated with ashes was the way to go...wouldn't you usually throw out the food that fell in the dirty water ? Not the Aztecs and Mayans. Craaaazy. In any event, once the corn has been treated it can either be ground finely into masa harina for making tortillas and tamales, coarsely ground into grits, or left whole as hominy. Hominy can be purchased dried or canned...since I was a first timer, I went for the can. No shame in my game. 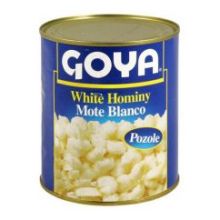 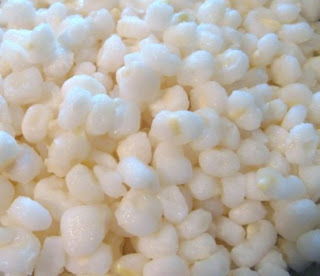 A little odd looking, to be sure...draining in the colander it looked like nothing more that wet Styrofoam. I must admit that my romantic notion of posole slipped just the tinest bit...but onward I went.

The next step was to roast myself some peppers. I ended up buying some really gorgeous poblanos because that's what looked good in the market - but use whatever you find. Hatch chiles are popular for posole when you can find them...New Mexico peppers would be lovely...or, of course, you can use canned - there are some very acceptable canned roasted chiles out there. For this recipe I also threw in a couple of minced jalapenos since poblanos aren't very hot...and next time I'll add even more, as the crockpot really tames the heat (plus according to my friend "Aunt Bea" the hominy soaks up the heat as well...thanks as always for you wisdom, AB :))
To roast peppers, place them over an open gas flame until they blister on all sides (bbq tongs are a wise tool choice here), then place them in a closed paper bag for about 10 minutes until they soften. They can also be roasted in an oven - more detailed instructions can be found here : http://www.chilipeppermadness.com/roasting-chili-peppers.html .

Now that you've got hominy and roasted peppers, it's a snap to throw the rest of the ingredients together in the crockpot and just go about your business. About 15 minutes before you're ready to eat, start putting together the garnishes - I have a long list below, but by all means don't feel pressured to put them all out. Just choose whatever sounds good and off you go ! 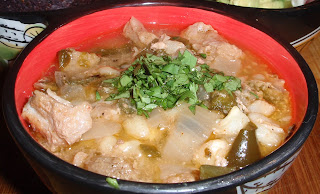 Place posole ingredients except stock in crockpot and mix well.  Add enough stock to just cover ingredients in crockpot. Cover and cook on low setting for 6 - 8 hours or on high setting for 3 -4 hours. Serve with any or all of the following garnishes :

Sour cream is also recommended by many, but we didn't love it with this (and I love me some sour cream). If you have some, by all means try it out !
Posted by Karen at 7:15 PM