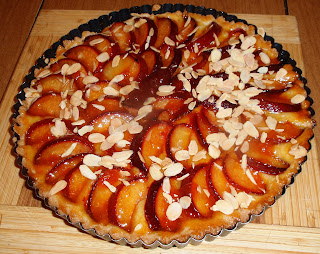 Plum cake is another one of those things that I grew up eating, courtesy of my good German heritage. There would come a time in the fall when you'd start to see the small plums called Italian or prune plums -  little dark purple oblong jewels, smaller than standard plums, firm and juicy sweet-tart. As soon as those little babies showed up, you knew it was high time to get your butt over to Oma (my great-grandmother)'s house - for there was bound to be plum kuchen. 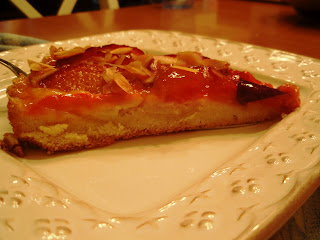 Oma's kuchen was a thing of beauty. Made in a good-sized baking pan, it had a lovely golden base with neat rows of plums marching down the length of it. Not exactly cakey or bready or pie-crusty, but somehow a delicious combination of all three - with lots of plummy goodness in each square. Oma would offer you a cup of tea or coffee, and you'd sit there with your cake, chatting with one of the most special people on earth - who somehow always knew just the right thing to say to you - and you would think that you were the luckiest person in the world. I never did find out the secret of the plum cake, though...I wish I had asked, about that and so many other things.

I have been on a quest to recreate the plum cake for many years now, and have made some very fine cakes along the way...none of them quite like Oma's, though. Many of the recipes I found called for a yeast dough, which somehow seems wrong - I mean, I'm sure they're perfectly nice cakes and all, just not what I was looking for. Some recipes had the plums sunk way down into the cake, which again might be delicious - but I was adamant, I wanted my plums on top. The other thing that kept popping up in recipes was almonds...and I knew I didn't want almonds.

Until I found this cake.

This cake broke all kinds of my rules - it involved not only almonds, but a glaze - and it was made in a tart pan. Definitely not what I remembered from Oma's kitchen. But the darn thing just looked so good...the plums were gorgeous, and the crust looked and sounded like the golden deliciousness that I remembered. And it looked easy...not that I don't love me a dessert challenge, but there was football to consider. So I went to Russo's, and bought my plums, and mixed my batter and crossed my fingers. And oh my god, what a cake. This thing was Plum Perfection - buttery crust, sweet-tart plums...so good it brought tears to my eyes. And it was in fact super easy - one of the great things about a tart like this is that it looks so impressive, with the lovely swirl of plums...it's really dead easy to do. Start on the outside edge, lay a plum slice down with the tip towards the outside, then add another slice and slightly overlap...work your way around the outside until you get back to Plum #1. Start another circle inside that one, and so on.  A removable bottom tart pan is definitely a good investment - you can get a fine one for under $10 (Christmas Tree Shop is a great place to look). You'll find yourself using it for all sorts of tarts, savory as well as sweet...and the best part is that most tarts require no rolling, just pressing into the pan. What comes out is so professional looking, everyone will think you're a pastry chef. Which, of course, you are :)

No, this isn't exactly Oma's kuchen...but she would have loved it, I am sure. And maybe that's what she was really trying to tell me...to trust my instincts and take my chances. And if you make it with love, they will come to the table. Thank you, Oma.

A note on the plums : this cake will work fine with regular plums...they are harder to pit, though. Choose small ones if using standard plums - ripe but still firm (not mushy). 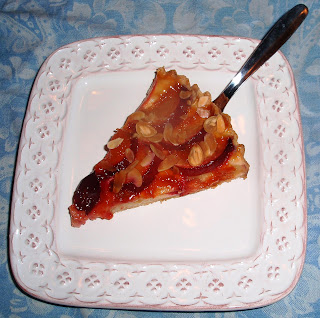 
Set the oven at 350 degrees. Butter a 10-inch tart pan with a removable base.

In a bowl, whisk the flour and baking powder. In another bowl, cream butter, granulated sugar, egg, and vanilla with an electric mixer until blended. Gradually add the flour mixture into the butter mixture and combine until all the flour is incorporated. Transfer the mixture to the tart pan (it will be crumbly) and with lightly floured fingers press evenly onto the bottom and sides of the pan. Arrange the plums, cut sides up, in circles on top.


Bake for 35 - 40 minutes or until the crust is golden brown. Leave the oven on to toast the almonds (below), and set the tart on a wire rack.


In a small baking dish, toast the almonds, turning often, for 10 minutes or until they are lightly browned. Keep an eye on them – they can burn quickly !
In a small saucepan  heat the preserves, stirring constantly, until they comes to a boil. Spoon the preserves over the tart (brushing with a pastry brush if you have one - makes it easier to get each plum).  Scatter the almonds on top.

Serve with whipped cream (optional)
Posted by Karen at 11:48 PM