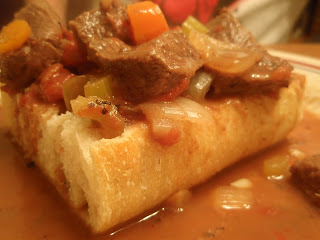 I know...you're sitting there asking yourself why on earth deer would wear trenchcoats. Or why I just didn't call this "Venison Stew in Bread Rolls". Blame George R.R. Martin, that's what I say.

First, a history of trenchers. Trenchers are not, in fact, coats. They are basically a sort of plate, made from stale bread, that were popular in medieval times. Bread for trenchers was specially made to be very sturdy, with a substantial crust - and then allowed to go stale, forming the perfect base for the stews, roasted meats, etc that were a staple of medieval cuisine. Feasts for the wealthy would feature fresh trenchers for each course - even dessert ! The bread could of course be eaten, but was often given to the poor or thrown to the dogs as a sort of status symbol - "we're so rich, we can even throw away bread...Sir Donald of the Trump got nothin' on us !"

And now, enter ol' George R.R. For those who don't know, George R.R. Martin is the author of the "Song of Ice and Fire" series of books - better known to TV types as "Game of Thrones", though that's really just the name of the first book. The novels are of the "epic fantasy" genre - sort of a cross of "Dune" and "Lord of the Rings". The HBO series is fantastic, and after watching the first season we promptly ordered up the book series. I haven't finished the first one yet, but my guys are already on the fifth and latest - and are absolutely hooked. One of the recurring themes in the books is food - plenty of feasting and all, described to the last detail. The setting of the books is pretty much medieval...as are the feasts. And with a freezer still stocked with venison...and a visit from the bread fairy...a little tribute to my guys, and their literary obsession :). 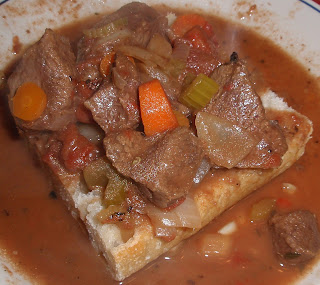 Trencher Venison Stew
Can easily be served over egg noodles, if you prefer - or even made with beef...

Cover and cook on HIGH for 4 hours, or low for 7-8 hours. Serve over bread slices (or wide egg noodles, if you prefer !)

OPTIONAl : If you prefer a beef stew with a thick gravy, about 20 minutes before you want to serve turn the crockpot to HIGH. Melt the butter in a small saucepan and whisk in the flour. Whisk in the broth from the crockpot, a ladleful at a time, until you have a nice thick gravy. Whisk this back into the crockpot, and let cook another 15-30 minutes or so.
Posted by Karen at 8:16 PM