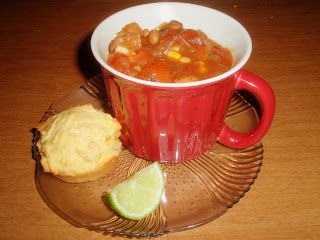 I really was not a fan of beans as a kid. I think I was afraid they all tasted like canned baked beans, which were one of the very few foods I simply would not eat - and of course, being half-raised by New England Yankees meant this was a problem come Saturday night. I'd get down a few hot dogs and a ton of brown bread, but the beans...those went to Sput (the dog :) ). It was only when I got older and realized that beans came in varieties other than canned baked that I realized how much I'd been missing. Now I love them, any way I can get them.

I've already blogged about a few of my favorite bean dishes- cassoulet , frijoles borrachos - but this was a new one for me. This dish was one of those things that just sort of happened, for a number of reasons - one of which was the frijoles, actually. The last time I made them, I soaked way too many beans and there's been a bag of them taking up space in my overstocked freezer ever since. We also had our very first snowstorm of the season today, and I really didn't relish going out for any more ingredients. Mostly, though, it was because our planned ham dinner didn't happen on account of a nasty virus going through the house. One resident foodie was down for the count, but the other one requested soup - and as I was out of carrots and celery (and the snow was flying), it was going to have to be a soup that didn't involve either.  Voilà - pinto bean soup.  Of course, I didn't photograph it as I was making it, because I didn't think it was going to amount to much (I mean...no carrots or celery ??) Imagine my surprise when it was absolutely amazing, and something I'll definitely make again.

My soup is somewhat based on this recipe, though with quite a bit of adjustment. As for the bacon drippings, as with most things beans are always better with bacon, and I do usually keep some frozen for just this sort of occasion. Just let the drippings cool, then run then through a strainer before you freeze them. It's a good idea to do them in small quantities (ice cube trays, snack size baggies etc) so it's easier to just grab a bit when needed. However, if you're not quite as crazy as me and you don't have any drippings handy, oil would work perfectly fine in this recipe - just adjust for salt if needed.

Cornbread is definitely called for with this...pictured is my own recipe for cheesy pepperjack cornbread, just made into muffins instead of a square. Gotta change things up every so often :)