Beef and Oyster Pie with Guinness 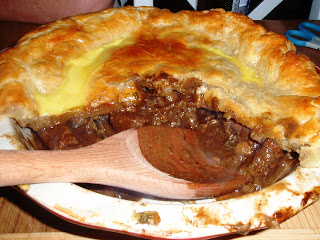 Okay, I know it's still summer and all. But we have been absolutely obsessed with this pie ever since we first tried one at the Skellig last winter. The Skellig is known for having the best fish and chips on Moody Street (actually, the best I've had anywhere - including the pier in Brighton, England. Yes, the Skellig's are that good). But this popped up as a special one night...and really, who can resist a pie with three of the most beloved foods ever...beef, oysters, and GUINNESS !! So we ordered it, and it was scrumptious, and we set about learning to make it. And this past weekend, with a hurricane looming and oysters in the pantry...pie it was. 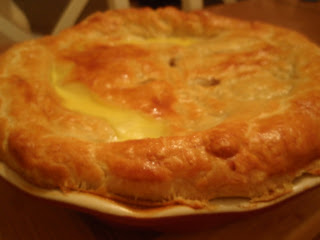 This recipe is basically a variation of a Rick Stein one that Mark found online. Rick's called for fresh oysters, which we absolutely love and eat raw as often as we can get them. For whatever reason, we couldn't find enough decently priced fresh ones at Whole Foods the first time we made this, so we ended up using canned...which really worked perfectly in the pie. Just as well, as whenever an oyster gets opened around here it doesn't last long before someone just has to pop it in their mouth.

The other major tweak Mark made was to use substitute shiitake mushrooms for half of the called-for button mushrooms. This is something I do in my risotto as well - the shiitakes are so rich, but the button mushrooms make such a nice contrast in texture. Use a total of 8 ounces of whatever your favorite mushrooms are (or what looks good that day), and you'll be in heaven.

A note on the Guinness...while regular Guinness would work fine, the Extra Stout really gives an amazing depth of flavor...rich, thick and luscious. If you can find it, definitely give it a try - well worth it ! 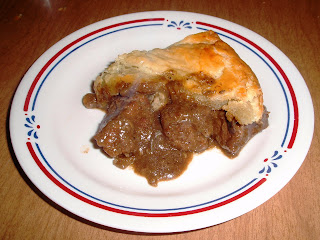 Beef and Oyster Pie with Guinness
Rick Stein, as interpreted by Mark

1 8 oz can boiled oysters (not smoked)

Season the pieces of steak with salt and pepper, then toss with the flour and shake off but reserve the excess. Heat half the oil in a large saucepan and brown the meat in 2 batches until well colored on all sides. Transfer to a plate. Add another tbsp of the oil, half the butter and the mushrooms to the pan and fry briefly. Set aside with the beef. Add the rest of the oil and butter, the onions and sugar to the pan and fry over a medium-high heat for 20 minutes, until the onions are nicely browned. Stir in the reserved flour, then gradually add the Guinness and stock and bring to a boil, stirring.

Return the beef and mushrooms to the pan with the thyme, bay leaves, Worcestershire sauce and salt and pepper to taste. Cover and simmer for 1½ hours, until the meat is just tender. Lift the meat, mushrooms and onions out of the liquid with a slotted spoon and put into a deep (2 pint) pie dish. Bring the liquid to a boil and boil rapidly until reduced to 1 pint. Remove and discard the bay leaves and thyme twigs, adjust the seasoning if necessary and pour into the pie dish. Stir everything together well and leave to cool completely

Preheat the oven to 400F. Add the oysters to the pie dish and push them well down into the sauce. Roll out the pastry on a lightly floured surface until it is 1in larger than the top of the pie dish. Lay the pastry over the pie dish, and press down to seal. Trim away the excess overhanging pastry and crimp the edges between your fingers to give it an attractive finish. Chill for 20 minutes to relax the pastry. Brush the top of the pie with beaten egg and bake for 30 to 35 minutes, until the pastry is crisp and golden and the filling is bubbling hot.