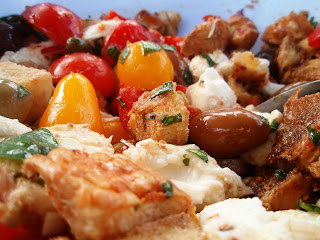 You gotta love those Italians. 1/4 of my heritage is Italian, but I think the only part I inherited was the cooking part. Well, that and the talking with my hands thing :). Anyway, the Italians have come up with one of the absolute best uses of stale bread ever - panzanella. Bread tossed with tomatoes, oil and vinegar is the base, but you can pretty much throw in anything that goes with bread and tomatoes - and really, what doesn't go with bread and tomatoes ? Have you seen what they throw on pizzas lately ? 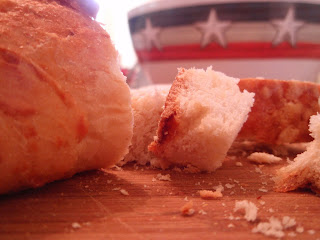 A few weeks ago I ended up with half a loaf of Asiago bread that didn't get eaten, and I immediately threw it in the freezer with dreams of making Panzanella. An Asiago bagel that came in an assortment met the same fate.

Panzanella has to be made with stale bread - not only stale, but bread that started out with plenty of substance. If you use something too soft, it will turn into mush...definitely not Culinary Orgasm. Bagels are really kind of perfect, as (properly made) they have plenty of chew to them. Really, though, whatever you have is great - as long as it's real bread. And if you don't have it, check the "day-old" rack at the store...they're sure to have something that will work.

What I'm giving you here is what I used in this batch - but feel free to experiment with this one. Many recipes use wine vinegar, but I use balsamic as I had plenty on hand (and I love it with these flavors). I got a great bunch of mixed olives at Russo's which included caperberries (the large berry of the caper plant, not to be confused with the tiny round "capers" which are the immature bud - the caperberries are much milder in flavor). I also threw in some fresh mozzarella - the best fresh mozzarella on earth, fior de latte from the Mozzarella House in Everett (also available at Russo's). Really, though, go with whatever you have...this is great, great summer food. All your food groups without using your stove...not wasting leftover bread...and absolutely delicious to boot. Culinary Orgasm, indeed !! 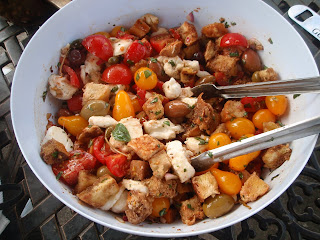