We start the summer foodie season with a post about a sometimes mundane item : Macaroni Salad . I have a very strained relationship with both macaroni and potato salads...for one thing, I can't eat store bought versions, no matter how hard I try, no matter how upscale the store. There's always some sort of off flavor that I can only describe as "bad refrigerator". I do, however, love most homemade versions of these summer staples. My personal theory with the mayonnaise-based versions is that they have to be mixed while the pasta and/or potatoes are both somewhat warm, then the whole thing has to be chilled. Takes longer, I know...but if that step is skipped the flavor is just not the same.

The versions of these salads I grew up with are both very different from the standard - but both very, very good. The potato salad we had as kids was German, from my mother's mother and grandmother...and German potato salad doesn't involve mayonnaise at all. (At some point, I'll cover Oma's Potato Salad in this blog - it deserves its own entry for sure ! ) The macaroni salad my dad's family made at the house in Maine as kids, though - macaroni, tunafish and peas, how I love you so. This was made in huge vats to feed the stream of hungry family members that were at the house all summer long. Breakfast, lunch or dinner...you could always count on a bowl waiting for you in the fridge. So simple, and so good...like so much Maine food, just perfect and something I've always aspired to be able to do. I think I have a pretty good version here (though we'll see what my Aunt Alice and Uncle Skip have to say ;) ) - at least, my friends and family seem to love it. And if it doesn't seem "foodie" enough for you, think of it almost like a veal tonnato - except mixed with pasta instead of veal, and peas taking the place of capers. Either way, it's some damn fine food.

I threw the Blueberry Vodka Lemonade in this post, because blueberries always make me think of Maine (my Sinclair cousins nicknamed me "Blueberry Eyes" because I ate so many of the damn things :) ). Rest assured, we were not allowed to drink anything like this in Cushing as kids - even once we discovered the "secret" liquor cabinet in the pantry... not that *I* ever knew anything about that !! 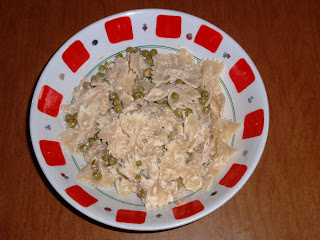 While pasta is cooking, mix mayonnaise, tuna, mustard and relish in a large bowl. Drain the pasta well, and add to the mayonnaise mixture, stirring well to combine and adding more mayonnase if it seems to need it. Add the peas, and stir lightly to distribute. Chill until pasta is cold before serving. 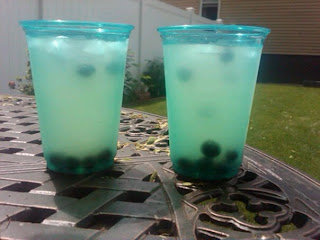 Deceptively good...do not attempt to drive after consuming, especially if you make them in keg cups as shown above ;)

Fill glass about 1/3 full with ice. Add blueberry vodka to cover ice and come about halfway up cup. Top off glass with a good prepared lemonade and a handful of fresh blueberries. Stir well before serving.
Posted by Karen at 2:29 PM