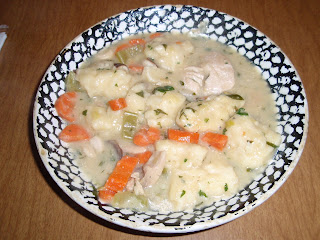 oh, how I love snow days :) Almost two feet of snow and still snowing !! The hard part, of course, is deciding what to make...blizzards make me crave warm comforting stew-type concoctions. The problem this week, though, is that we'd done lamb stew and jambalaya over the weekend, and have been eating both for days...what to make that wasn't anything like them ?

Chicken and dumplings is a dish that I've always liked the idea of...it's a little out of my bailiwick, not super common in New England, but then again I'm not exactly known for sticking close to home culinarily :) I have a crockpot Chicken and Dumplings recipe (included in my Crockpot Conversations blog entry) which works really, really well..but since I was going to be home all day, I wanted to try something a little closer to the traditional. So, of course...traditional, Southern...who ya gonna call ? Paula Deen, of course. Everything looked fine to me until I got to the bottom...canned cream of chicken soup ? Oh no...kissing cousins with cream of mushroom soup, which the fantastic Hank Shaw of Hunter Angler Gardener Cook calls the Voldemort of the cooking world : That Which Shall Not Be Named. Clearly, not what I was after...so I checked in with Simply Recipes . Much, much better....well, except I didn't have any bone-in chicken, so I wasn't making my own stock. I did have chicken thighs, though, and stock ready to go....combine the two recipes, tweak and adapt for what I had on hand, and throw in some of my own touches...folks, we have a winner !!! Chicken and vegetables swimming in a rich, unctuous base with well-developed flavors...light, fluffy dumplings... happy shovelers and snowbound people. Yep, I love snow days :)

A note on the peas...I would have added them if I had them, though I list them as optional as some folks don't like them - and the dish was perfectly fine without them. Also, if you are like my sister and adverse to dark meat chicken, go ahead and make it with boneless skinless breast...won't be quite the same, but SOME people prefer it that way :)


Chicken & Dumplings
Chicken:
2 leeks, white and tender green parts only, chopped
Vegetable oil for pot
4 lbs boneless skinless chicken thighs
1 tsp salt
½ tsp pepper
5 cups chicken stock
1 bay leaf
1 sprig fresh thyme (or 1 tsp dried leaves)
4 carrots, sliced
4 stalks celery, sliced
8 – 10 pearl onions, peeled and quartered (or halved, depending on size)
½ cup green peas, frozen (optional)
6 tblsp butter, unsalted
6 t tblsp flour
1 cup mushrooms, sliced
¼ cup heavy cream
¼ cup chopped parsley
Salt and pepper to taste
Dumplings:
2 cups cake flour
2 tsp baking powder
½ teaspoon salt
¾ cup buttermilk
2 tblsp melted butter
To make the chicken: swirl some oil in the bottom of a Dutch oven over medium heat. Sauté the leeks for  5-10 minutes or so, until they start to soften and brown a little. Throw the chicken in with the leeks, add salt and pepper , and let the chicken start to brown too. Add the stock and bay leaf and bring up to a simmer. Add the carrots and simmer 5 minutes, then add the celery and onions. Simmer for 20-30 minutes, or until the carrots and chicken are just about done. Add the green peas.
In a separate saucepan, melt the butter and whisk in the flour. Let this roux cook a few minutes, stirring the whole time, until it starts to brown. Now take a ladleful of the stock from your chicken and add it to the roux, whisking the whole time. Repeat this a few times, until you’ve added 3 cups or so of the stock. Add the mushrooms and the cream, and let simmer a few minutes while you pull the chicken apart – just go in there with two forks and shred it right in the pot.  Stir the mushroom mixture back into the Dutch oven with the chicken, add the parsley, and stir well. Taste and adjust seasonings if needed.
Make the dumplings: sift together the dry ingredients, then add the buttermilk and melted butter. Mix this gently until it just comes together and you can pinch off pieces –  larger than a grape but smaller than a walnut, slightly flattened (don’t over-handle the dough though, you want to keep them light). Have the stew at a slow simmer, and drop the dumplings on top –spread out as much as you can. Put the lid on, and let them simmer for 15 minutes – no peeking ! Test with a toothpick after time is up, and if they still have any raw doughy parts let them go another 5 – 10 minutes.
Posted by Karen at 8:27 PM