one hell of a Cassoulet 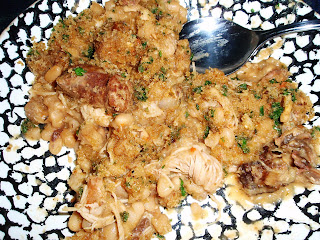 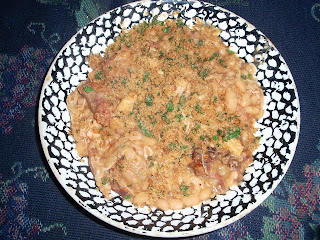 in my article on crockpot cooking, Crockpot Conversations, I mentioned Cassoulet as one of the dishes that adapts very well to the crockpot . As I also mentioned, one of the really cool things about Cassoulet is that you can change around the ingredients to suit whatever you happen to have. Another thing I love about this dish is that you set it all up and basically forget about it...making it perfect for NFL Sundays. Today's version was so good, it gets its own entry :)

Basically, I followed my own recipe as written, with the following variations :

Used one bag of navy beans, and about a third of a bag of cannellini beans (to use them up) . Had to do the Quick Soak method, as I was too wiped out from Sprigs to do much prep last night.

Buried a smoked wild turkey wing in the soaked beans, then added about four cups of chicken stock and a cup of leftover sauce from the Sprigs chicken livers (saving the livers themselves for later in the process).

Let the beans simmer about two hours on high, then added chicken thighs that I had browned on both sides, three chorizo sausage links from Hager's (cut into quarters and browned), and the sauteed veggies as per my recipe.

After another hour on high, I stirred in the rest of the livers and turned the temperature to low .